What was linear television? What is Martini TV?

If you have Sky+ or another personal video recorder (PVR) or when you stream or download TV from the internet then you are placing a nail in the coffin of linear television.


Anyone who has Sky+ or another personal video recorder (PVR) will already know that linear television is dead. Once you have such a device, when you stream or download TV from the internet, you are placing a nail in the coffin of linear television.

In the last century, television was initially live and unrecorded. When television services started in 1936 it was impossible to record the programmes made economically, even for the broadcaster. The only method would be to record it onto cinema film.

The invention in the 1960s of video tape storage provided the broadcasting companies with the ability to pre-record, edit and (of course) repeat programmes.

The domestic video recorder (remembered for the betamax verses VHS video cassette format wars) finally allowed the viewer to record programmes and watch them at a time and place of their choosing.

However, the complex and obstructive process of getting the recording onto a tape left most viewers without a practicable time-shifting facility. (To time-shift a programme is to record it to watch it at a time of your choice).

Even with innovations such as Videoplus+ did not overcome the problems of tape recording: the poor picture quality, limited recording time, sequential access (using "fast" forward and rewind to find the start of a programme) and non-portability.

Less than 10% of people who had a VHS used it to time-shift programmes, whereas 99% of people with a Sky+ use it for this purpose.

The shift to digital broadcasting in the last years of the 20th century was initially for the benefit of the broadcaster. By using MPEG-2 data compression techniques, at least four and up to twelve television channels can be carried using the frequencies and equipment that carried one single analogue television channel.

But technology follows a familiar path of Moore's law: every eighteen months the speed and capacity of a digital system doubles for the same price.

To a computer system, digital television is just data, like everything else it deals with. So by using hard drive storage it is possible to provide all the record and play facilities of a VHS, with random-access (so you can get to any part of any recording in less than an instant) and linked to an electronic programme guide so with one-press of the remote control you can record an entire series of programmes.

You can watch a programme whilst it is still being recorded on a personal video recorder - very handy for a long film - and you can also pause live TV when your mobile phone rings.

But this is just the start. The ubiquitous MP3 player and mobile phone are just mobile computers. By linking these devices to a personal video recorder, you can now watch these TV programmes anywhere you choose - there is no need for a receiver in the playback device.

The speed of internet connections also follows Moore's law. This diagram shows the speed of a typical connection (now called broadband) and how it relates to the data rates of digital television. 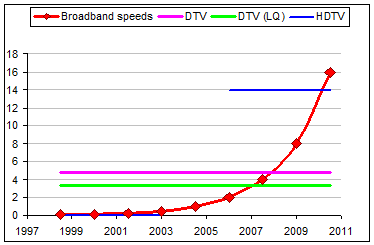 If you have less bandwidth than is required to watch a television programme, your only option is to wait for the programme to download before you watch it. Once your bandwidth is more than 3.4Mb/s, you can stream low TV quality video. At 13.9Mb/s you can instantly watch a high-definition service.

One big advantage of using a programmable general purpose computer (like your Windows machine or Apple Mac) is that you can download new versions of the decoding software. The current MPEG-4 standard (known as DivX and xvid) encodes video at half the data rate for the same quality of picture.

This just is not possible with a 'dumb' Freeview or digital satellite box. This makes it impossible for traditional broadcasters to make use of improved data compression decoding techniques without requiring all their existing customers to replace their receiver equipment.

So whilst broadband speeds increase and on-line data compression increases the picture quality to bandwidth-required ratio, Freeview and digital satellite is stuck with MPEG-2. The same thing will happen with today's brand new HDTV boxes, although MPEG-4 potentially has a longer shelf life.

(In case you need to know, say in a pub quiz, there is no MPEG-3 standard. The MP3 files you hear so much about actually contain data defined as audio layer three of the MPEG-2 standard).

By the time of digital switchover in 2012, Freeview will be a dated technology. This is because the limited number of frequencies that it can be broadcast on will limit the number of simultaneous channels that can be received, whereas most internet connections will have passed the typical Freeview television channel rate of 3.8Mb/s data rate five years ago.

Basically, once you have the bandwidth to choose from literally anything you want to watch. There will be milliards of hours of television to choose from, not just what is being broadcast now on 30 Freeview channels or 1000 satellite channels.

And so the final problem with the classic PVR will be gone, because you will not have to choose what you want to watch before it is broadcast.

The BBC is calling this opportunity Martini television, after a 1970s advert for the beverage. The end of the schedule removes from the BBC the need for the classic stripped schedule, introduced to the BBC by it's now chairman Michael Grade in 1983.

There will be no need to make programmes that are multiples of half-hours: there could be extra-long form versions of programmes for the committed and executive summary versions for anyone who has convinced themselves they don't have the attention span.