The BBC and ITV will provide on demand TV to all Freesat boxes, starting soon.


As promised at the launch of Freesat, the BBC iPlayer is coming. Just by plugging the Freesat box into your home network, you will be able to watch iPlayer content on your television set with nothing but your existing Freesat box.

If the iPlayer does not show on your Humax or Sony box, enter the page number 5483 into the BBC "Red Button" service..

In addition, the ITV Player will be live on Freesat by the end of May 2010.

Freesat box Emma Scott is "delighted to be able to offer BBC iPlayer to our viewers. All the HD receivers that have been bought and will be sold in the run up to Christmas will deliver BBC iPlayer so there'll no need to buy any new receivers. There's a great schedule of programmes be available on BBC iPlayer in the lead up to Christmas with the likes of The Gruffalo, the EastEnders Special and Doctor Who.

BBC iPlayer has been fantastically successful online so being able to offer viewers the ability to watch it in their living room on a subscription free TV service for the first time will be transformational. We'd like to thank the BBC for all their hard work bringing the service onto our platform." 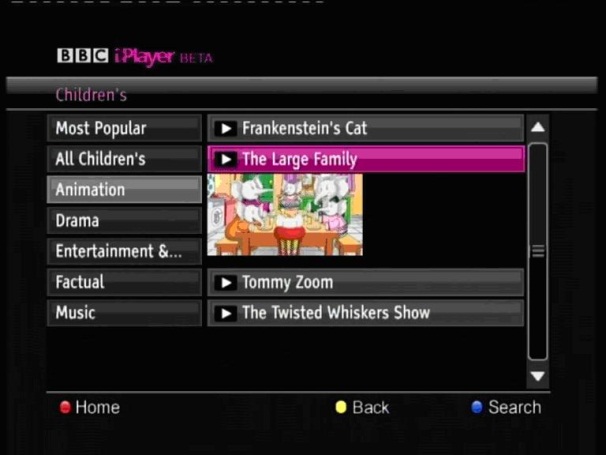 A Beta version of BBC iPlayer will be available on Freesat 7th December, offering the BBC catch up TV service for the first time on a non-subscription TV service over open internet.

Watch what you want, when you want to

With BBC iPlayer on Freesat, you can catch up on your favourite BBC programmes from the last seven days or catch-up on whole series you may have missed, whenever you want and from the comfort of your sofa.

In the run up to Christmas around 450 hours of programming will be available each week, including popular programmes such as Strictly Come Dancing, Top Gear, EastEnders, Life, Gavin and Stacey, and The Gruffalo. And with the BBC's full Christmas schedule still to be announced, Freesat viewers can look forward to even more great BBC programming being available whenever they feel like watching it.

The launch of BBC iPlayer on Freesat adds to the fantastic array of programmes already available on the platform including over 140 channels, with free HD from the BBC and ITV.

It's easy to set up BBC iPlayer on Freesat. Simply connect your HD Freesat TV or HD box to your broadband via the Ethernet port using an Ethernet cable or homeplug.

Alternatively, you can arrange for a professional to connect BBC iPlayer for you, either as part of full install if you have just bought Freesat or separately if you already have Freesat installed.

You will initially be able to access the BBC iPlayer beta service by pressing the red button to get to the BBCi menu.

Help with Free satellite?
[][][
In this section
Comments
D
Dave
10:50 AM
I purchased a 37LG7700. in sept 09 and cannot get bbciplayer.LG have washed their hands of helping.The Freesat Humax HD box has been withdrawn. Richer Sounds who sold me it are not interested.Future buyers should carefulwho they deal with.
Can other users tell me what signal level they get on a freesat installation at the set?

Dave's 1 post
J
Jim F
sentiment_satisfiedSilver
10:48 AM
Dave: Freesat TVs or digiboxes will typically display 100% signal strength and 100% signal quality on a very ordinary signal from a minidish.
Neither signal strength or signal quality will help you with getting BBC iPlayer though, since that comes through your telephone line and you need an ethernet connection from a modem to get it.

Jim F's 141 posts
N
Nedbod
sentiment_satisfiedGold
1:13 PM
... and within less than two years later the BBC radio i-player has been REMOVED !! such that people paying for it cannot receive it, but people who aren't paying for it (via computers and smartphones) can get it for FREE !!!

Time to charge them and restore it to people who pay methinks !!

Ditto BBC THREE & BBC THREE HD TV which is also going to be an online service next year, despite the fact that I'm paying for it out of my TV Licence.