Viewers in Essex and parts of Suffolk will have no analogue television from Wednesday 20th July 2011. Unless you use cable or satellite to watch television, if you don't use a Freeview box or set, your screen will be blank.

Most people need only perform a "full retune" on their Freeview box or TV, but it would be impossible with 460,700 homes covered by the transmitters, for no-one to have a problem. 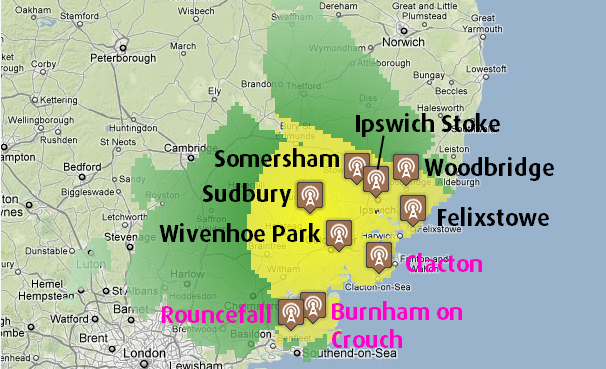 If you had no Freeview service before, you will have the BBC channels digitally from Wednesday 6th July 2011. This is a single multiplex of the BBC channels (radio, television and text) for most people.

If you didn't get this limited Freeview service on 1st June 2011 then you may need a new aerial.

If you are served by a public service (relay) transmitter - Felixstowe, Ipswich Stoke, Somersham, Wivenhoe Park or Woodbridge relay - you now need, from lunchtime on 15th June 2011 to rescan, and you will get a second Multiplex with ITV 1, ITV 2, ITV 1 +1, Channel 4, Channel 5, Channel 4+1, E4 and More4. And that's your lot if you have a standard Freeview receiver, see Freeview retune - poor public service transmitters.

In addition there are three new Freeview Light transmitters at Burnham on Crouch, Clacton, Rouncefall.

All Freeview boxes automatically scan the available broadcast frequencies looking for channels, and they do this from C21 to C69. Most older Freeview boxes will, if a duplicate version of a channel is found whilst scanning, such as another BBC One region, placed it in the 800-899 channel range.

Freeview HD will start on Wednesday 20th July 2011 from Sudbury and all the relay transmitters. You will need a Freeview HD - DVB-T2 receiver to watch the channels. An HD TV set with Freeview is not enough.

Help with Freeview, aerials?
[][][
In this section
Comments
S
Stevief
11:42 PM
Hi, since the sudbury switchover my BT Vision box seems to be having problems, sound interference and lost blocks, seems to happen on various channels but particularly annoying on BBC2 and Channel 5. Aerial and cablishing is 5 years old in new house. The thing that seems odd to me is that the same freeview channels (bbc2 and Channel 5) are clear and good on my Samsung tv (aerial fed through the bt vision box!) this means if i watch live on the tv no problems but if i record on my bt vision box (or try to watch live on bt vision box) I get interference. Can anyone advise?

Stevief's 10 posts
Briantist
sentiment_very_satisfiedOwner
8:08 AM
Stevief: Are you using an amplifier or booster as part of your system? If you have one, remove it now.

Briantist's 38,844 posts
S
Stephen F
3:06 PM
Colchester
Briantist: No I do not have an amplifier or booster and I have tried the advice in the freeview intermitent intereference article with no success.

Stephen F's 10 posts
S
Stephen F
8:41 PM
Colchester
Briantist: Correction I have just discovered a Labgear MSA262/S Distribution Amplifier in the loft. I tried turning off the power to this unit but then I get no signal at all! So I am guessing, as only the BT Vision box has a problem, can I use a 2-Way UHF Splitter (like maplins JM13P) take the coax from the aerial as the input and run one output to the amplifier and connect the other output to the coax which goes to the BT Vision box? Or is there a better way?


Stephen F's 10 posts
Briantist
sentiment_very_satisfiedOwner
9:32 PM
Stephen F: I did say "remove" a booster, and not power it off. If you disconnect the power from an amplifier, it will block the signal.

The best thing to do is to bypass the distribution amplifier (connect one output to the input) and see if that fixes the problem. If it does, then yes, use a Y-connector.

Briantist's 38,844 posts
S
Stephen F
9:55 PM
Colchester
Briantist: Yeah I know you said remove, it was just me thinking it was worth a try to power it off. I will get a connector tomorrow so I can bypass the amp and keep my fingers crossed. Thanks for your help.

Stephen F's 10 posts
G
Graeme Potter
5:02 PM
Burnham-on-crouch
Brian.
I live in Burnham on Crouch and we now have the New Burnham Relay Transmitter(from Sudbury)It would seem that the HD Mux Ch51 is not transmitting? Mux1 Ch48,&Mux2 Ch52 are fine with v.good signal. Do you know why this might be,or when it will start to be transmitted. I received the HD Mux from Sudbury on Ch47 in july ok when it went live.
Graeme

Graeme Potter's 2 posts
A
andyboy
12:49 PM
Benfleet
hi is sudbury booster power up day or not what it said look east this moring can whay time thanks andyboy

Briantist's 38,844 posts
Briantist
sentiment_very_satisfiedOwner
6:31 PM
andyboy: As above "The SDN multiplex will temporarily operate on channel 49 (at 14kW ERP) from the first stage of Sudbury's switchover until mid-2012. Arqiva A will remain on its pre-switchover channel (C54) from switchover until mid-2012. Arqiva B will remain on its pre-switchover channel (C50+) until late 2011, and then temporarily move to channel 63 (at 2.2kW ERP), before adopting its final allocation of channel 56 during mid-2012. "