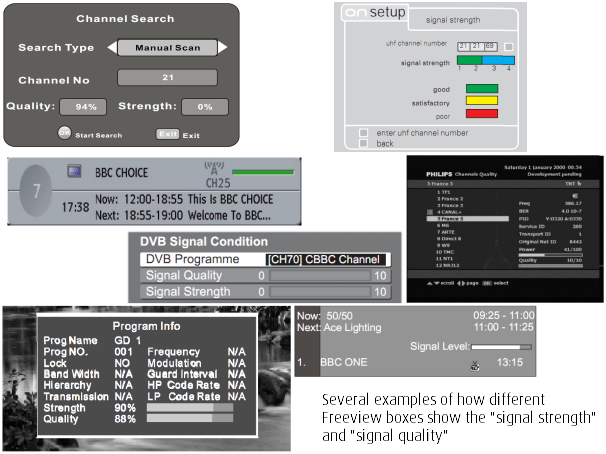 Help with Freeview, aerials?
[][][
In this section
Comments
N
Niven
1:56 AM
Hi, I wonder what your opinion is this.

I'm in South Yorkshire on Emley Moor, 17 miles away as the crow flies. The new BBC A Mux that started last week at 174kW shows up as 10/10 strength on my Panasonic TV. The quality shows up as poor at first before going to 10/10 after a second. I'm wondering if I'm going to get too much signal after switchover and whether I should remove my 6-way 4dB amplifier.

I cannot ever re-call having a single problem with all the low power Muxes, including the HD mux, which were all at 75%-90% strength. If the low power signals (4/10kW) came in pretty strong, do you think the new high power ones (174kW) will be overload for my sets? I briefly tried using an 8 way splitter instead, with a 12dB loss, and the new BBC A mux went down to about 8.5/10. I've put the amplifier back for now.

Niven's 11 posts
Briantist
sentiment_very_satisfiedOwner
8:41 AM
Niven: You have not provided a full postcode, so it hard to be specific, but yes, it does sound like you have an overload.

As pointed out in the above article, "75%" is a suitable signal strength, it is the signal quality that matters.

Niven's 11 posts
Ian Grice
sentiment_satisfiedGold
5:35 PM
Hinckley
What happens if you need the booster as a distribution system?

These sets have extremely sensitive tuners, and the symptom you describe of the quality initially showing low then jumping to high is quite commonly seen when the signal they are receiving is on the verges of being a little too strong. (although their tolerance to this is quite good)

This only mentioned in case you thought that it might be a fault.

jb38's 7,179 posts
J
jb38
sentiment_very_satisfiedPlatinum
6:04 PM
Ian Grice: The boosting effect (in reality) of most normal distribution amps is quite low, that is unless one has been chosen that isnt, but if it did exceed what was required and was causing problems on TV's connected into the system, then a simple attenuator in line with its input from the aerial would rectify the problem.

This said provided it wasn't the type of distribution amp that powered a mast head amp or similar, as then an attenuator would be required on each TV that was affected.

jb38's 7,179 posts
M
Mazbar
sentiment_satisfiedGold
7:57 PM
Ormskirk
The main problem with high power transmitters is that it masks any problem you might have with your aerial. If your cable is broken and water is getting in if the transmitter is lower powered the signal would break up when it rains, now with high power transmitters the cable needs to be almost broken to break up, this sound great for customers but when there £1000 tv packs up because water has been pouring into it the high power transmitter is not so good. Winter hill went up from 10 kw to 100 kw they should have increased it to 50 kw this would help most people with problem areas and still show up any aerial problems

Mazbar's 384 posts
Ian
sentiment_satisfiedGold
10:32 PM
Hinckley
I only ask because my signal strength and quality shows almost 100% even before it reaches the amp and is then split 2 ways, one goes to a TV the other goes to another amp and is split 4 ways. Don't seem to have any problems apart from 1 TV that has a quite bad freeview receiver built in that is affected via the power lead. Use the Waltham transmitter postcode LE10 0NS.

Ian's 497 posts
Briantist
sentiment_very_satisfiedOwner
8:29 AM
Ian: It could just be the common problem of a poor quality fly lead on the single set?

Briantist's 38,844 posts
Dave Lindsay
sentiment_very_satisfiedPlatinum
12:05 PM
Ian: Perhaps the pros can clarify whether I'm barking up the right tree here, but what about removing your booster and installing a splitter instead?

Probably best to split it five/six ways if possible and feed each receiver from a single output on the splitter.


Is this a possibility?