The end is near for analogue radio... Part 3, satellite Freeview online and DAB

Around the turn of the millennium, radio found new ways to get from studio to listener: satellite, cable, two new forms of terrestrial and over the internet, but the real revolution has been in listening choice.


Radio in the Sky

Looking back to Astra UK Channels in 1997, we can see one interesting development for radio was the inclusion of the BBC Radio services on the Astra 1 analogue TV service.

As each transponder could carry six associated audio feeds, UK Gold had BBC World Service and Radios 2, 4 and 5 Live in mono, and Living carried Radios 1 and 3 in stereo. In addition, Virgin Radio, which was a mono AM service could be heard in stereo from the Astra 1 satellites. 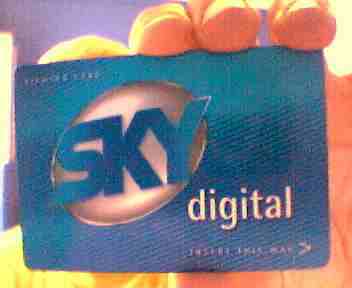 For this reason, it almost came by accident that on 1st October 1998, the new Sky Digital television service would also include lots of digital radio stations. With an abundance of capacity and the radio stations could take advantage of the MPEG2 layer III audio system (aka "MP3") and provide many radio stations in high quality stereo. The inclusion of radio stations in the channel numbers also meant that listeners could tune into radio stations without any difficult tuning issues.

Of course, the first "official" digital radio service developed out of the Eureka 147 project - see DAB: an introduction to the Eureka DAB System and a guide to how it works, which gave the world MPEG-1 layer II audio MPEG-1 Audio Layer II.

The BBC started test transmissions of DAB in January 1990, and its national DAB multiplex went on air in 1995.

The DAB service was thought of as a way of supplying superior quality sound for the existing five BBC network radio stations. However, the very high cost of receivers, around £800 back in 1998 (£1200 in today's prices). The BBC launched digital radio in the UK in 1995 followed by national commercial multiplex operator Digital One in 1998.

However, as early as 1992, the BBC had published "Extending Choice", which proposed that the BBC stop chasing mass audiences, and provide high quality services to audiences that the commercial broadcasters were not. This first camge to fruition in September, 1998 ( BBC News - ENTERTAINMENT - BBC unveils digital TV) when the BBC News 24, Choice and Knowledge channels were announced, and that DAB would soon have BBC Parliament (an audio service), the Asian Network and a side-channels to back-up Radio Five Live.

This was a strategic decision to remove DAB from being a "sound quality" proposal to one of "listener choice". However, DAB radios still cost £300 (£420 at today's prices).

So, it was quite fortunate for these stations that the big digital terrestrial balls-up that had been ONdigital (see ONdigital Timeline - ONhistory for more) resulted in the BBC having two DTT multiplexes to fill when the replacement service Freeview launched.

For quite some time, the second multiplex only carried BBC FOUR and Cbeebies, and there were plenty of bits left for all of the BBC national stations to be carried to most homes in very high quality.

As the new BBC radio stations came on air, they were also added to the digital satellite platform.

For those who are not happy with the provision of more services at lower bitrates, most UK radio stations can be listened to online at high quality. The unexpected popularity of listening to radio on Freeview has allowed many homes to sample stations that would otherwise have been exclusive to DAB. Now when people consider a DAB purchase, many "new" stations are already familiar.

How many people are listening on long and medium wave?

Due to the cuts imposed on the BBC from the Licence Fee being frozen, the BBC is looking into removing the Long and Medium Wave services. 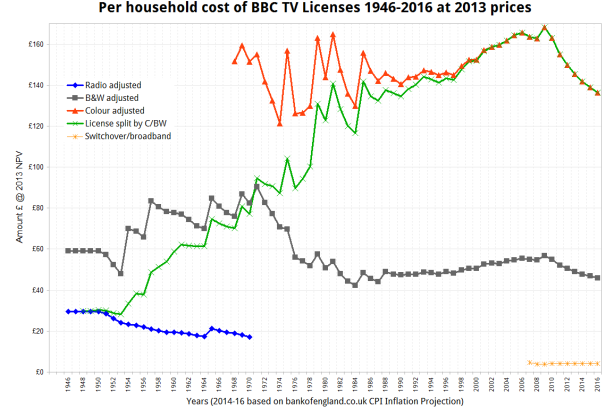 According to BBC News - BBC set to cut ... 2017 "There will also be no reinvestment in long wave, which will lead to the end of Radio 4 on LW in the long term".

"The BBC says the eventual closedown of the Long Wave service is determined not so much by the digital switchover but a dwindling supply of valves used by the Droitwich transmitter, owned and operated by Arqiva. At the last count there were only 10 left and their operating life is put at between one and 10 years" (from Will the move to digital cut off my long-wave radio? - Telegraph).

As part of the DQF process, four BBC local radio stations closed down on medium wave. At three of these there were no complaints, but at BBC Radio Mersyside, according to BBC criticised for AM radio shut-down - Media - theguardian.com 600 listeners complained.

If there are really only 19,200 people listening to long and medium wave, then it's probably time to turn off the service.

If you look at it the other way, then a service proposal to cover 20,000 people in the UK from 73 transmitters wouldn't be regarded as economic.

It may also be worth noting that if you can't get your BBC radio stations from DAB, or satellite, or Freeview, or online: it is doubtful you are paying for a TV Licence.

So why switch of FM/VHF?

In the last part, The end is near for analogue radio... radio gets very high - Digital radio the limited FM radio spectrum prevents the UK having more than 5 national FM stations.

DAB, with just two national multiplexes provides 25 stations. There is space reserved for a second national DAB service, which could add another 15.

In London, there are an additional three DAB multiplexes adding brining the total stations to over 55. Central Scotland has 45 stations.

Over the last few years, the BBC and commercial operators have been making the DAB local radio network match the FM local radio network - Ofcom - Annex B. Local DAB build-out plans. There are still a few areas of the UK to cover - notably Derbyshire and West Wales - but both in car, and in home, DAB reception is as good as or better than FM.

But there are 758 FM transmitting masts in the UK, some carrying as many as 12 FM stations (Black Hill (North Lanarkshire, Scotland) analogue radio transmitter ) This is a considerable cost for the radio broadcasters because DAB is as low as one-sixth of the cost of FM transmission.

"Transmission will be cheaper, too. DAB can be transmitted at lower power than today's FM and AM signals yet with no loss in geographic coverage, which means less cost to the broadcaster (and less power consumption means DAB is more environmentally friendly than conventional FM and AM)." - WorldDMB - Frequently Asked Questions (FAQ)

The current plans are to announce a rolling switch off of VHF for the BBC and commercial broadcasters: the switch off will occur areas where digital radio use is highest. Community radio stations (which are not profit making) will continue on FM.

However, the recent success of the Small Scale DAB The potential for lower-cost transmitting stations in support of DAB rollout suggests that community radio could now be very cheaply provided by DAB too.

Now in 2013, you can grab a DAB radio from your local supermarket for £20 ASDA Portable DAB Radio - Radio - ASDA direct - one sixtieths of the cost in 1998, there is little standing in the way of radio choice being available in every UK home.

Help with TV/radio stations?
[][][
In this section
Comments
Briantist
sentiment_very_satisfiedOwner
8:22 PM
Trevor Harris:"I am against the BBC forcing DAB down our throats when the majority don't want it."

I note with interest that use of digital radio is over 50% now. "52.5% of the population tune in to digital radio every week" http://www.rajar.co.uk/do….pdf

that rather puts your "majority don't want it" point to bed.

So, I have 55 radio stations to listen to. What are they if not choice?

You are correct, DAB was not originally marketed as being to increase choice, but it has for ... over a decade and you should probably accept it now.


Briantist's 38,844 posts
Briantist
sentiment_very_satisfiedOwner
8:28 PM
Sorry, I missed "FM has RDS which DAB does not support".

And the main use of RDS is to distribute alternative frequency lists, which is a bit pointless for a single frequency network...

Briantist's 38,844 posts
Briantist
sentiment_very_satisfiedOwner
8:36 PM
I'm stunned that you'll go on about bitrates of services and then bring up a service that runs at

and all the local DAB EPG data services?

Briantist's 38,844 posts
B
Ben Hardaker
9:32 PM
I considered buying a DAB radio but found that in Lincolnshire both BBC Lincolnshire and Lincs FM are not available on DAB and by the sound of it will not be for the foreseeable future.
Also the postcode checker suggests that I will need a rooftop aerial in Skegness, which is not very useful if you use a portable radio. And a neighbour confirmed the patchy reception.
Finally the poor battery life with DAB clinched things and I decided to stay with FM.
DAB will have to improve a good deal to eclipse FM as far as I can see.

Ben Hardaker's 3 posts
C
Charles Stuart
sentiment_satisfiedSilver
10:42 PM
Bristol
Given that DVB-T2 can be transmitted in 1.7MHz channels, that Freeview radio gives excellent sound reproduction, that DVB-T2 receivers are becoming cheaper and cheaper and that radio only receivers can be made for cars, why not phase out DAB in favour of DVB-T2 radio? Perhaps we could start by cutting channel 36 into 4, maybe by encroaching on channels 35 & 37 in places, 5 or 6 1.7MHz channels. Then give one to the BBC and one to Digital One to duplicate their DAB services. The others could be used for local radio multiplexes where they'll have the greatest impact without interfering with each other. Then, once the idea of DVB-T2 radio has caught on, replace all DAB with DVB-T2 services. I think that thins might work better in the UK than trying to switch to DAB+. Could it work?

Remember that coverage is liable to get better in the future, and that DAB reception is very much an individual thing - your neighbour might have his radoi in a place where it going to be tough getting a signal, whereas you might be fine. Its true that DAB suck power like anything, but for much of the time, thats not a problem, because most of us plug the radio into the mains most of the time.

What I keep seeing here are reasons to stick with FM - thats fine, but there is no reason not to have both at present, and use both as and when. Both have certain advantages, but a lot of the 'advantages' people are coming up with for FM are minor at best for most people.

I did not say that those wanting digital radio were in a minority. I said that there is a minority wanting DAB. It is a favourite scam of BBC and others to confuse the issue by using "digital radio" and DAB interchangeably.

RDS is not just about "alternative frequencies" it also supplies 9 other services. One of the most usefull is the "traffic program" which DAB does not support.

If the commercial stations want DAB why did Ofcom had to bribe the to go on DAB. I don't think any commercial station would be prepared to loose 50% of it audience with a switch over. As we know Channel 4 was unable to find any stations to go onto it's multiplex and so we still have a whole commercial multiplex empty.

Yes a interested organisations may have signed up to the plan but the public have not.

And as for DAB providing a choice of 55 stations the Internet gives a choice of thousands.

Trevor Harris's 367 posts
Briantist
sentiment_very_satisfiedOwner
11:10 PM
Charles Stuart: OK... But why not just listen to the existing audio services on DVB-T and have done with it?