From Baird to Persistent Peer-to-Peer networks

From since the start of television broadcasting in the UK in November 1936, there have been only a very few changes to the way that the pictures and sound are distributed.

From since the start of television broadcasting in the UK in November 1936, there have been only a very few changes to the way that the pictures and sound are distributed. The introduction of 625-line pictures, colour, NICAM and digital television has not changed the distribution systems used. 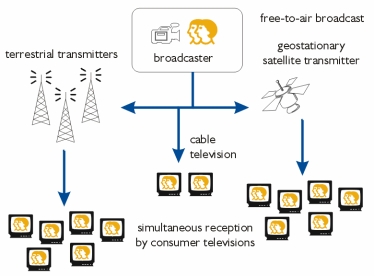 The original network of terrestrial transmitters was joined by satellite and cable distribution in the 1980s. Each television channel requires a unidirectional path (from broadcaster to consumer) that is a fixed cost, independent of the actual number of viewers. It follows therefore that the cost per viewer is higher for less-watched programming, less for popular programming.

The cost of these distribution systems is considerable; the BBC spent 157 million on Transmission costs in 2005.

Prior to March 1990, there were two ways that consumers paid for the television they watched. Launching in a paternal age, the BBC's annual income from a television licence tax provides a bi-directional trust between the corporation and the licence-fee payers.

The dawning of the British consumer age brought Independent television in 1955. The 30-second spot advertising sill familiar today provided the income for these new television companies. But the very British replacement of a public monopoly with regional private ones was soon to be called "a licence to print money". By being able to guarantee viewers through providing a restricting choice, the ITV companies were able to charge the advertisers enough to pay for the programme production and broadcast.

To the consumer the choice is simple: buy a TV and watch the programmes. Aside from the payment of the licence fee, there is no requirement for the broadcaster to have any other communication with the viewers. In this age, the consumer is a passive viewer of television.

The introduction of Channel 4/S4C (1982) and breakfast television (1983) expanded the choice, but left the charging method unchanged. This situation changed only when two companies, British Satellite Broadcasting and Sky Television launched subscription television in 1990.

By adding encryption to the existing broadcast systems, it is now possible to charge the consumer directly just for the programmes they want to watch. To do this requires the viewer to buy a decoder box and to be provided by the broadcaster with a subscription card ? in reality a small computer chip. 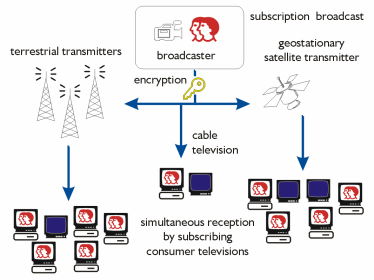 By restricting the viewing of a channel to the subscribers only reduces the value of the channel to advertisers, so the subscription payment must cover the cost of providing both the programming and supplying the card.

Because the same distribution is used as for mass-audience programmes, the cost to subscribe to a specialized (unpopular) channel is higher than for a popular channel. 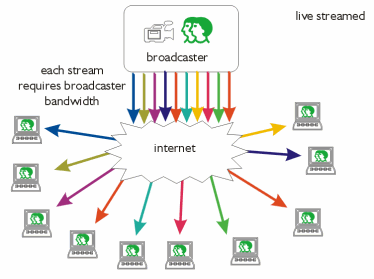 Firstly, the internet is peer-to-peer and bidirectional whereas broadcast networks are one-to-many and unidirectional. This means that a broadcaster needs to have enough bandwidth to supply each client individually.

Secondly, on broadcast networks (and the telephone network) there is "reserved bandwidth", whereas the internet assigns the available data bandwidth on a moment-by-moment basis. The means that to provide a video to watch requires complicated buffering and careful control of the rate the data is sent from the server. This is expensive and gets increasing costly and complicates when the number of viewers increases.

The internet was designed as a peer-to-peer network from the start. Whilst the most popular service, the world-wide web is clearly characterised by connecting to servers, in reality the servers are just "well known" peers.

Many of the other popular services use this peer-to-peer nature, the best example being chat programmes such as msn messenger, Yahoo messenger and ICQ.

Persistent Peer-to-Peer (PP2P) networks can be created by using software such as BitTorrent. These provide a highly efficient method of distributing large files by splitting them into many thousands of small chunks and allowing the clients to pass these chunks between each other.

This has a great benefit for the traditional broadcasters. Rather than having to pay for the bandwidth to supply each and every client, they only have to pay to pass the file containing the programme to the network once. 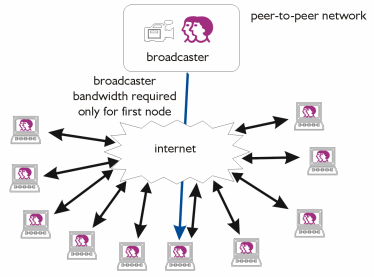 So you can transmit worldwide to tens, thousands, millions or multi-millions of people for a few hundred pounds, compared with the BBC's annual 157 million spend on traditional broadcasting.

Traditional "spot" advertising is having a hard time working with these peer-to-peer networks. 98% of people who watch TV via PC or personal video recorder fast-forward though the adverts, rendering their effectiveness questionable.

The next step attempted (by the broadcasters and rights holders, rather than the consumers, viewers and licence fee payers) is to add a subscription system to the PP2P network. This allows the distribution of programmes in the same way, but the file is encrypted and requires both special software to allow it to be viewed by the consumer and a (tiny) personalised digital certificate from the DRM supplier. 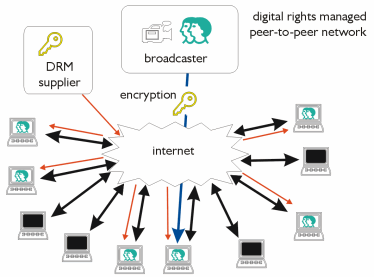 So, the BBC iMP trial has added a further complication. The BBC has, for the trial, opted for digital you-have-no-rights management to restrict the viewing of the programmes downloaded from the persistent peer-to-peer network. You can watch the programmes for seven days since their original broadcast; only on the PC you download them on and only within the UK.