Having passed Sky News, BBC News 24 now plans to drop the 24 suffix from the channel name.


The BBC 24-hour news channel is popular with viewers, but has never recovered from a bad launch in many journalists' eyes.

However the BBC's new channel has outperformed Sky News in terms of weekly reach for the whole of 2006 so far.

There have been at least 1,500,000 viewers who watch News 24 at some point in the week over those who watch Sky News. 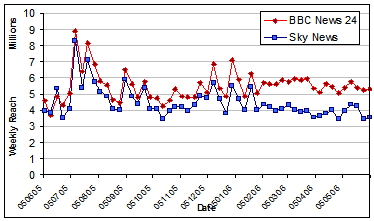 The BBC told Marketing Week: "We are looking at branding possibilities across the board for the network, but there is definitely no timetable set yet for any decisions to be made."