Have you been tempted to buy a HDTV because you have seen a sign in the shop saying "The BBC is currently developing plans to produce all its TV output to meet HDTV standards by 2010"? Perhaps you have read this on the BBC News website?

Perhaps you have read about the BBC/ITV Freesat system that is to launch next year, with the expectation that you could watch the eight BBC TV channels in high definition?

If so, then the new BBC Trust consulation document will be very disappointing, as the BBC is now proposing just one four-hour-per-day single HD TV channel showing just 14 hours a week from BBC One, 8 hours from BBC Two and 5 hours from BBC Three, Four, CBeebies and CBBC! 5% of the output will be specially commissioned HD material.

This channel will be broadcast live on satellite and cable, and be provided overnight on Freeview. It will be broadcast at around 15Mb/s (falling to 12M/bs) in MPEG4 (a mixture of 1080i or 720p format), which will require the following services to be removed from Freeview between 2am and 6am:

Initially the bias would be towards natural history, factual and drama with some arts, music, children's, live events and sport, but would eventually include EastEnders, Casualty and Holby City! 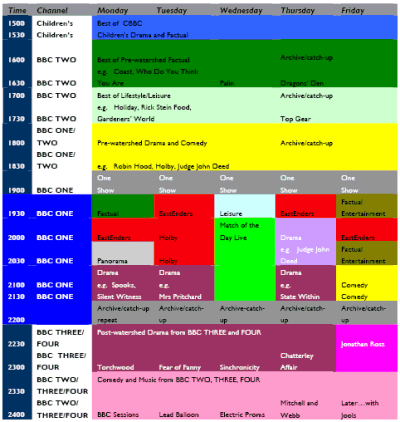 Films and sport will be no more than 20% of the HD channel, but the BBC will not acquire these simply for HD use. Whilst the BBC is committed to removing all repeats from BBC One, it thinks that 30% repeats is fine for the HD channel.

To assist with retail sales, the cable and satellite services will broadcast a promotional loop from midnight to 3pm.

To watch on satellite a HD satellite receiver would be require, but the Freeview service will require a PVR as the programmes are broadcast on the night before normal transmission.

The BBC Consultation is here.

Is a four-hour single HD channel from the BBC OK or should they provide, as can be found in the US, all the output in HD?


Help with High Definition?
[][][
In this section
CommentsYour comment please