A group of concerned licence fee payers protested to the BBC yesterday.


A group of concerned licence fee payers protested to the BBC yesterday.

The campaigners, from defectivebydesign.com are concerned that using the Microsoft-only Digital Rights Management system for the BBC iPlayer is an insult to the people who have chosen not to use Microsoft software.

They point out that the Television Licence Fee is a universal charge on anyone who owns one or more television signal reception devices. As these people could have no computer, a Microsoft Windows computer, an Apple Macintosh or a Unix-style computer, the BBC should support ALL computer systems, not just XP.

Listen to an interview with the Defective By Design. 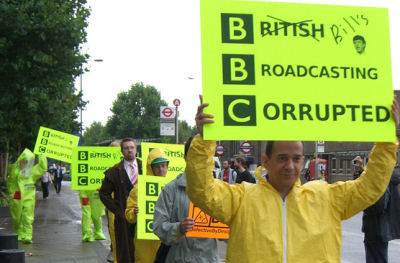 They suggest that Microsoft is leveraging the BBC's publicly funded television programmes to force an unwanted, flawed and impracticable restrictions on the whole of the UK's population, which they see as a corruption of the BBC's core policies that have provided mass public support for the corporation television service since April 1925.

The BBC's Ashley Highfield responded by saying: "We believe in Universality, I would not let our content be restricted to one platform. Beyond IP, we are also exploring how we can get versions of BBC iPlayer on to Freeview (DTT), FreeSat, and have plans to launch on cable with Virgin Media. We look closely at all possible platforms for distribution. PDAs, media centres, city centre video screens, kiosks, and so on. Some platforms require particular technologies, and some may simply not be economically viable for us to reversion for or distribute to (we must always weigh up the cost per person reached)."


Help with Outside the UK?
[][][
In this section
CommentsYour comment please