The cream of broadcast, retail and consumer electronics were honoured on May 20th at the inaugural Freesat Awards, with BBC HD securing the public vote as it picked up the Freesat Viewers' Choice award for Channel of the Year.

Winners were recognised across nine categories during a ceremony hosted by stand-up comedian and TV personality, Sean Lock (8 out of 10 Cats, QI, Have I Got News for You), at London's Pigalle Club. These included:

Separately, leading consumer technology magazine What Hi Fi Sound & Vision selected the Product of the Year, the Confederation of Aerial Installers chose the Freesat Installer of the Year and there was also a special public vote for the Viewers' Choice Freesat Channel of the Year Award.

Emma Scott, Freesat's MD commented at the awards "Tonight has been a wonderful celebration of a brilliant first year for Freesat. I'd like to congratulate the winners and thank all Freesat's partners who have contributed to our success so far. Having already reached 400K sales and with on demand IPTV services, such as BBC iPlayer, on the way this year, we're looking forward to building on this success through 2009 and beyond."

The BBC HD channel was a clear winner with Freesat's viewers. The ever-growing variety of quality drama, comedy, sport and natural history programming in brilliant High Definition is building this new channel a well-earned reputation with audiences. BBC HD took the largest share of votes in the Freesat viewers' poll, surpassing all others to become the Freesat Channel of the Year 2009.

Freesat Product of the Year (judged by What Hi Fi): Humax Freesat+

The What Hi-Fi judging panel deliberated long and hard, finally choosing the Humax Freesat+ high definition digital TV recorder as their Product of the Year. Brilliant picture and sound quality, unique Freesat+ functionality and user-friendly touches such as the option to record in either SD or HD massively impressed the What Hi-Fi panel. 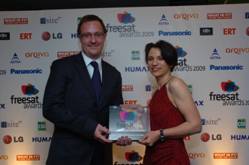 John Lewis's commitment to training has certainly paid off, with their incredibly knowledgeable staff going that extra mile for Freesat customers. Strong sales in store and John Lewis's unfailing commitment to Freesat promotion were key factors recognised by our judging panel.

Hickmans prides itself on being 'the only place for Freesat', expertly talking customers through the options and identifying the right Freesat products to meet their needs. A consistently strong sales record alongside excellent customer feedback, helped the judges choose Hickmans as Freesat Independent Retailer of the Year.

A news organisation brave enough to follow its own agenda, judges felt that Al Jazeera English frequently had cause to lead others rather than follow. Equally impressive for the judges was the channel's 'as the world turns' approach, providing viewers with ever-changing world perspectives on the challenging issues of the day. 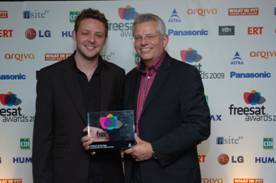 The judges were unable to choose between these two very impressive but very different channels and eventually decided that recognising them as joint winners was the only fair decision.

PopGirl offers quality programming for "girls that sparkle". The judges agreed that PopGirl serves its young audience extremely well, offering programming loved by parents and kids alike. Taking the brand into the online space, it has successfully built a strong PopGirl community. Girl Power lives on.

Wedding TV marries a real audience understanding with an impressive ability to offer unique, home-grown programming week after week. With nothing else quite like it, the judges were quickly drawn to the channel's infectious personality and its sense of originality. A breath of fresh air.

Described as 'an oasis of good manners,' by the judges, BBC FOUR impressed greatly with wonderful original dramas, documentaries and music programmes all delivered with a canny sense of the channel's audience and identity. BBC FOUR's 'curated' feel means there is always something engaging and enlightening to discover.

Rock is back in a big way, and Planet Rock's devoted audience is clearly captivated by the clever mix of programming from across this massive genre. The judges were also rocked by the station's strong sense of community and events like 'Childline Rocks'. With a distinctive mix of famous voices, Planet Rock is rich in content and strong on listener growth. All this convinced the judges to 'crank it up to 11.'

Freesat Installer of the Year: TSG

A hard-fought category, judges from the Confederation of Aerial Installers rated TSG above all others, recognising its long-standing achievements in the industry. A focus on training has undoubtedly paid dividends, creating a team of incredibly professional installers, always focused on doing a great job for Freesat customers.

Help with Free satellite?
[][][
In this section
CommentsYour comment please