Can you shove two cables down one?

Over the past year or so two almost forgotten pieces of equipment have re-emerged in the installation trade... Stacker/ De-Stacker equipment and brown Coaxial Cable, brown cable i'm not so worried. DIY and even Professional Installers seem to be fitting Stacker/ De-Stacker units in ever increasing numbers most believe they "Can shove two cables down one".

Whilst that is the principal of the system their are great benefits to such a system and there is great pitfalls. The invention of the Sky plus box brought extra challenges such as an additional cable run from dish to box, some people don't have the luxury of getting in another cable run. Possibilities they've built an extension to their home or the the most common they've moved into a flat with a communal aerial/ satellite system. 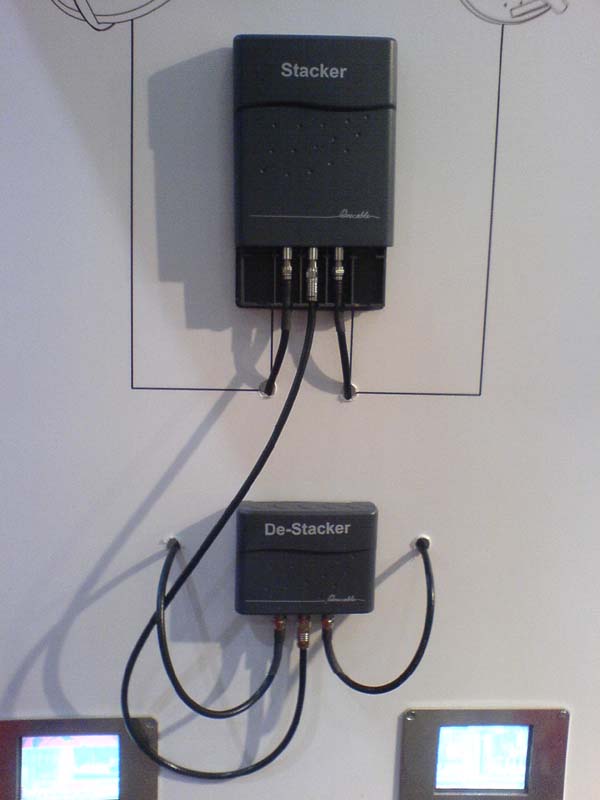 Two stories - Mr DIY has moved into his nice new flat and discovered he's one satellite cable, he's want Sky HD and Sky refuse the install as they normally do. He hatches a plan to buy a stacker/ destacker the cost of which is 70 quid hooks it up as per what he's read on the internet and it never works. Mr Fitter attends a job in a block of flats discovering he can't easily get another cable in or the multiswitch has no spare output. He goes about setting up a stacker/ destacker unit and discovers it won't work either.

Technical bit - A Stacker/ De-Stacker unit is a brilliant piece of kit if used right... Nine times out of 10 it is either botched or used with inferior cable. Cable type is the most important piece of equipment in the system, cheap poor coaxial cable known as RG6/ 60 is often high loss over distance and has the impedance of a sponge cake. CT/ TX100 or 125 is far superior because it's double shielded and suffers much lower loss. RG6 type cable tends to have a rating of about 1ghz, CT100 has a rating of about 3ghz. The job of the stacker is to use additional bandwidth to combine two satellite feeds, it does this by using a higher stretch of the band and effectively stretch's out's the other feed on a higher frequency, a lower grade of cable with a poorer rating can't cope with the job of performing this. The de-stacker pulls the two frequencies back down and separates them into two separate feeds ready for decoding at the set top box.

Factors that play apart are cable length - The cable run much be longer than 7 metres to account for impedance and to regulate for the insertion loss.

To conclude if this type of installation is to be used insure if you're using a multiswitch that it has a spare port - the amount of times i've seen two taped together. Ensure the multiswitch does not have a dc block function as the stacker itself requires a 9v power supply. Ensure you're using the correct cable and the correct length of cable. You cannot cut corners with there types of installations...


Help with TV/radio stations?
[][][
In this section
Comments
R
Richard Gagen
8:47 PM
Birmingham
Hi folks. Stacker-destacker has a bad reputation as regards "Not Working". However, several things can effect its operation. 1.Cable type as previously mentioned. 2. Any outlet sockets between the two units. 3. Poor 22K tone from sat receiver. This was common, and also effected certain multiswitches some years ago. It has recently has become a problem again, but with a different make of Sat receiver.
Hope this is of help, as the stacker unit is a usefull item.

Richard Gagen's 1 post
W
wutty
3:24 PM
I'm trying to find the best way to add Sky+ to a communal syetem, and I hope I can get some definative answers from you guys, as so far I have 2 opposing views!
I live in a development of 43 homes in a hertiage area. Planning restrictions limit us to a single communal system - 1 Sat Dish, 1 omni directional FM, 1 wideband UHF pointed at the Wrekin. These go through a distribution system split across 3 physical locations on the development. There are 5 Inputs (TV&FM combined, 4 sat - HH, HL, VH. VL) which go via Philips -22db taps into two philips SW1 7512E distribution switches and then on via a single cable to individual homes with splitter plates in the properties. Also from the tap the 5 feeds go to the next physical location with an amp & one SW1 7512E, and to the third location with a n amp (philips AMP9853) with a SW17508 switch. We want to add a sky+ service across the whole of the installation and 2 years ago were recomended stacker/destackers at a cost of about £6k - with the whole installation needing to be done at once. Recently, we have been told that SCR's will do the job and can be installed on a one-by-one basis - which is ideal as rather than pay for this out of communal funds, we can charge everyone for the work as and when they have it done, as many people don't want Sky at all! I asked the installers who did the original system (who also recomended stsckers 2 years ago) and while they like th enew SCRs they still think all the kit needs swapping out at one time. Phew!! Any one have real experience with SCRs and how they work in this type of configuration??? I can supply photos of the install if anyone is interested! Thanks folks!

Before you get too far with the SCR option, has anyone made you aware that not all satellite receivers (& not all sky boxes) are SCR compatable.

Mark Aberfan Aerials's 1,059 posts
W
wutty
11:28 PM
Mark. this is where it gets confusing! (by the way, this is all stuff I've been told, I'm not a pro in this area so forgive any gaffs etc) The original SCRs only worked with PACE receivers, and have been discontinued. There now seems to be a new design which has taken a while for Sky certification/ approval and was made available recently (last month or so??). This is supposed to be compatible with all Sky plus boxes. Can't recall the manufacturer's name but I have it somewhere if you need it! I have 2 installers saying they will work, but one says it can be done 1 at a time incorprating existing switches & hardware, the other that everything needs to be done at once and the switches etc changed out. So I'm not sure who (if anyone) is right...

Syn's 1 post
Briantist
sentiment_very_satisfiedOwner
7:20 AM
Syn: The linked item is designed to be fitted to an existing IRS distribution system, it is of no use whatsoever if you don't have one.

Briantist's 38,844 posts
D
Dave
11:03 PM
Hi Wutty
The job needs to be surveyed properly before advise of this nature can be given, and me for one would need to see whats been installed todate, stackers/destackers work very well when all things are installed correctly and the equipment is within the specifications required.
As mark stated cable quality is a number one problem and always has been with DIYs and spark contractors, I will guarantee to you if you ask any of the above two categories what grade cable they used on a particular job the reply will be satellite grade cable, must of here that a million times, its such a loose term, its like someone asking what grade cable did you use to wire your house with and me answering ooooo mains cable the stuff that grey.
I personally only ever use TX100LSF its all that carried in the van wether its terestrial or satellite installations.
Far as the big jobs with multiple buildings i will only ever use fiber optics these days, then coaxal on the final drops.
Most of it is stright forward if you do your homework when planning in the first place, after all its the equipment that does the work at the end of the day all it needs is to be installed and set up correctly
Regards

Dave's 3 posts
C
Charles
11:50 AM
Hi.
FOR A LONG TIME I.VE RAN TWO SAT FEEDS DOWN ONE CABLE THROUGH A MULITSWICH AND COMBINER AT THE twin tuner BOX. NOW THAT I HAVE CHANGED BOX TO A HUMAX TWIN I CANNOT GET ALL THE CHANELS ALTHOUGH ITS STATES TWO CABLES. PLUS I GET A MESSAGE LOW SIGNAL OR NONE.
CAN YOU HELP ME PLEASE. THANK YOU CHARLES.

You need to have two entirely separate feed cables from the LNB all the way to the Humax box. Each cable is used independently to both receive the incoming sgnals but also to control the connected LNB element (there are at least 2 elements combined inside one LNB). The control signals consist of different voltages as well as tone signals to set the LNB element to receive the desired signals. Hence the must be controlled separately.