The end is near for analogue radio... radio gets very high

Like all technologies, AM radio had advantages and some problems. Today we have a brief look at the 1930s technology we still use today: Frequency Modulation on the Very High Frequency band.

One interesting characteristic of radio signal that are transmitted in the Medium Waveband is that the signal is carried in two ways, both of which are useful.

One is called a "ground wave", which means the signal follows the curve of the Earth. This means that the receiver and transmitter do not need to have a line-of-sight. So it is possible for a medium wave transmitter can serve a radio set 500 miles or more away. For example the old BBC World Service transmitter at Orfordness on 1296 kHz at 1.9MW could serve Belgium, the Netherlands, Luxembourg, north-east France and north-west Germany.

Another feature of Medium Waves that, at night, they also make "sky waves". After dark, the signals reflect off ionosphere (if the mid-layer ionization is strong) like a mirror. So, for example, Orfordness could be received in much of Europe at night. For this reason, AM radio station have to lower their power output after dark. Long Wave radio signals do not reflect.

The benefit to broadcasters of operating a low number of medium wave transmitter sites is offset against the need to guard for interference from other broadcasters long distances away. Even low-power stations daytime stations can become the source of interference many times their usual coverage area.

To this end, there has to be international co-ordination of frequencies and power output levels for Medium Wave and Long Wave. The agreements put stations at 9 kHz apart from each other. Between 531 kHz and 1611 kHz there are 118 "slots", 75 of which are used in some way in the UK. Some of these are for national "single frequency networks", such as Absolute Radio 1215 kHz and sometimes for a single fill-in station such as BBC Radio Scotland (AM) 585 kHz at 1.2kW at Dumfries. 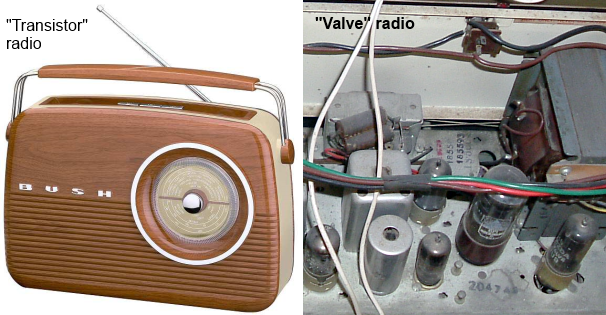 The BBC gets high

The limitations of Medium Wave transmission didn't just limit the number of stations that could be broadcast. Spacing stations 9kHz also means that the there was a limit to the quality of sound, as human hearing ranges up to 2kHz, and the signals using AM were mono. Whilst the 9kHz range is fine for listening to a single human voice (Voice Fundamentals - Human Speech Frequency), it isn't very good for the dynamicfrequency range of music.

Frequency Modulation was patented in 1933, but the BBC only started using the system for broadcasting radio in 1955. However this time the Very High Frequency range was used for transmission (from 88.0 to 94.6 MHz).

The FM provides a much better bandwidth - the mono signal goes up to 15 kHz. The system has also been enhanced by the addition of by two stereo "difference" signals, both 15 kHz wide, but this addition is susceptible to noise and multipath distortion and FM radios will flip back to mono when the signal is weak.

The benefit to the quality and reliability of an FM radio signal are clear, but the broadcaster has to provide a large network of lower power transmitters. For example, Radio 1 FM has 214 FM transmitters, whereas TalkSport, using the old Radio 1 MW network, has 29 AM transmitters. 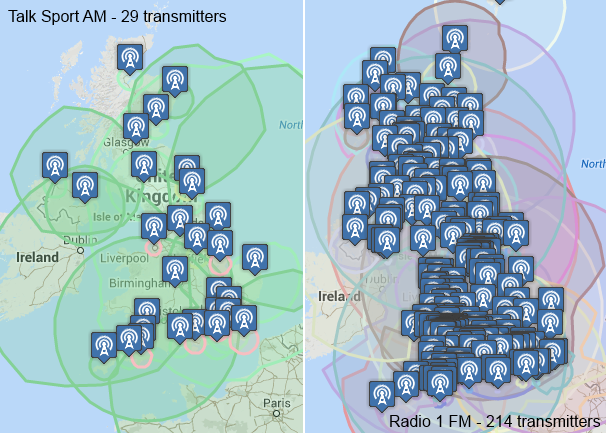 However, the smaller wavelength of higher frequency transmitters means that FM transmitters can be mounted onto existing transmitter masts (such as those used for UHF television or mobile phone masts) and multiple services can be provided from the same location.

However, FM does have drawbacks. The initial design of the networks assumed that a rooftop aerial and home listening would occur. Most masts were changed to "mixed polarization" to allow for mobile and in-car listening.

FM took off when commercial radio started in the UK, and now most analogue listening is to VHF.

The benefits and drawbacks of FM

FM radio is seen by some as a "gold standard" of broadcasting.

It is certainly true that compared to AM, with it "spooky sounds".

The CD is a good measure reference: with two-channel 16-bit PCM encoding at a 44.1 kHz sampling rate per channel, and thus a dynamic frequency range of 22.1kHz matching the best human ears - see Frequency Range of Human Hearing.

FM/VHF is limited to 15 kHz, and the stereo signal is provided in two subcarriers, rather than as two independent signals (known as "joint stereo"). If the FM signal is weak the receiver will switch to the mono signal.

The addition of the RDS system FM transmission and to car radios means that modern in-car tuners can, using a second tuner, test all the possible reception frequencies for the channel being listen to and automatically switch to the best. This prevents frequent re-tuning whilst driving.

You can explore the frequencies for yourself here:

In the modern world, this limited choice has found solutions in digital radio.

More tomorrow in Part 3, where we look at the development of satellite, Freeview, online and DAB radios.

Help with TV/radio stations?
In this section
Comments
MikeP
sentiment_very_satisfiedPlatinum
8:06 PM
Significant parts of Wiltshire have poor or no DAB coverage. I live in Wiltshire and have constant problems finding usable DAB signals as coverage is not yet 100% of the country - unlike Long Wave radio.

Briantist's 38,846 posts
MikeP
sentiment_very_satisfiedPlatinum
7:52 PM
Briantist
Interesting - but it shows I will still have reception problems where I live! There is an empty space in the triangle formed between Calne, Chippenham and Swindon - and I live in that 'hole!
Our current FM coverage is from the Naish Hill site, but that suffers from signal deterioration due to trees and intervening hills and the DAB signal from there is very poor in most of our house, only being usable outside and in one corner of a room nearest to Naish Hill (some 9 miles away).
So DAB will still not be an ideal solution for use and our neighbours in and around our rural hamlet.