To start a new "Affiliated" blog section on UK Free TV, I know you would love to see this map of the Underground as it will look in 2050 according to the London 2050 Transport Plan. I have spent much more time on this project than I had anticipated. A lot of thanks goes to the posters on the London Reconnection site for nit-picking every possible error from this map. 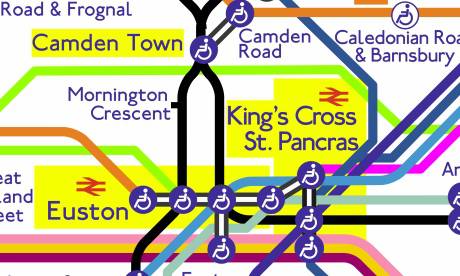 Download the WHOLE London 2050 - a Tube Map for the future as a PDF or click on this image to see it as an SVG (most modern web browsers support this). 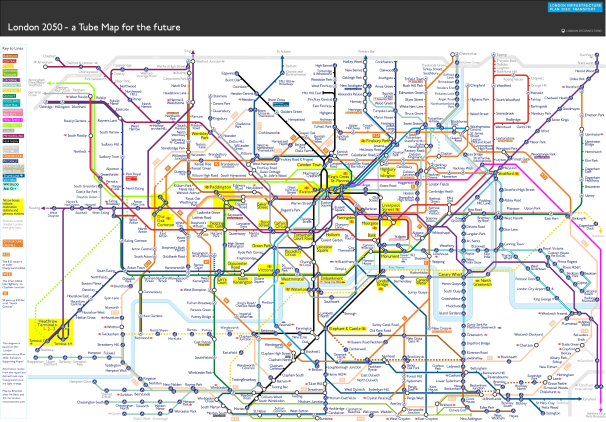 Things to look at

It was 100% essential to ensure that the Tube Map remained faithful to the one we use today, the one based on the designs of Harry Beck. 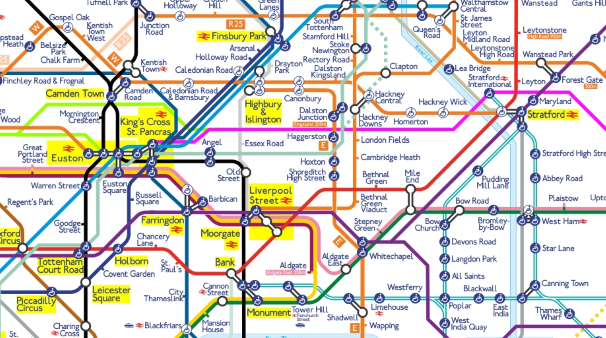 So, you will find that all the lines are horizontal, vertical or at 45 degrees.

One invocation that I did allow myself (spurred on by a comment from Diamond Geezer) was that the high-usage "destination" and "gateway" stations have larger font text and yellow highlight to help you locate these stations quickly.

Another slight innovation is that stations outside the "legal" Greater London area are shown with light colour text, and the M25 motorway is also shown where lines cross it.

As you can see from the above example, the following lines are shown that are not on the current map:

Crossrail 1: royal purple line. I am especially proud of the strong vertical in the top right hand side from Whitechapel to Stratford and on. This is going to be a fast line, so it has priority. On the right hand side the line is a strong horizontal and other stations have moved to accommodate the fast line.

Crossrail 2: line green line. This shows the current consultation route. I'm very proud of the way the line connects though the central area whilst remaining clear. This was quite a tough one to solve. 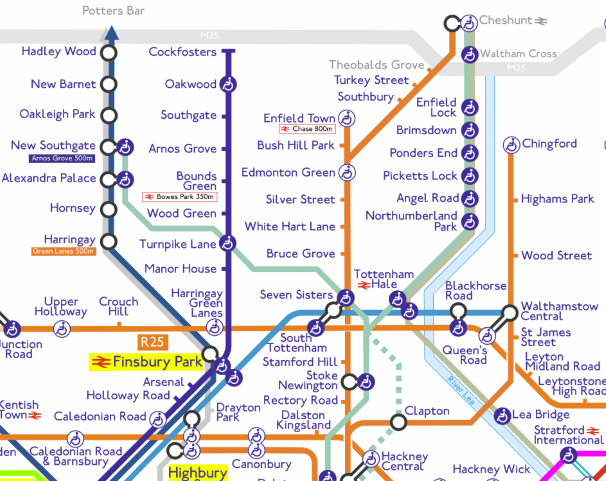 Overground: 2015 new lines in the Lea Valley, the above example showing the Chingford, Enfield Town and Chesunt lines (as well as Crossrail 2) with new interchanges.

The above diagram also shows the STAR line with Lea Bridge.

The Overground line from Upminster to Romford can also be seen on the whole map.

A useful little feature is out-of-station interchanges are shown with the walking distance.

This section shows the use of "off page" markers to show connections outside the London area, such as HS2 to Birmingham, Manchester, Sheffield, Crossrail 1 to Tring. Also shown here is the new Watford arrangements for the Metropolitan line.

In the lower right section you can see the proposed additions to the Bakerloo line.

You can see from the detail that the map also shows the new Thameslink arrangments, as well as the proposed changes to the Overground to create an outer orbital route called on the map the "R25".

Anyway, I really hope you enjoy the hard work that has been put into this.

The map featured on BBC London News on Wednesday! 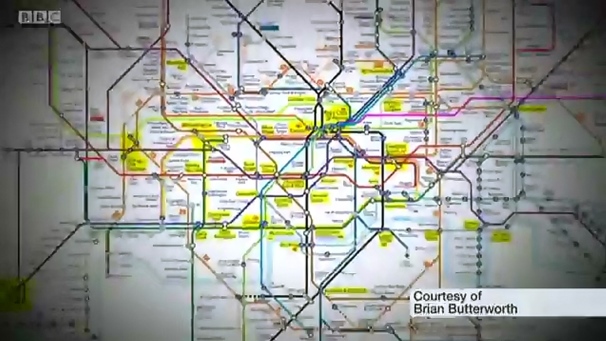 And now there is Crossrail 3 and Croydon Tramlink 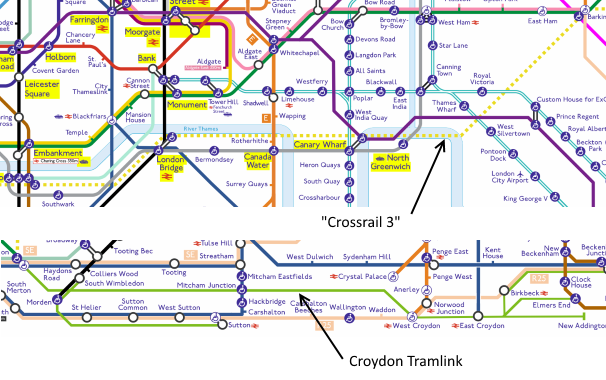 Help with
[][][
In this section
Comments
R
Richard E
sentiment_satisfiedBronze
9:29 PM
Well done Brian , its very good & looks fantastic , I am a bit of a train buff myself .

Briantist's 38,844 posts
S
Sam C
12:54 PM
Mark A: Fancy getting in touch with a poster manufacturer and marketing this? I'd be your first customer!

Perhaps you could ask the people at Time Out to correct their article so that it links properly to the full map rather than just their North London centric biased version? The article makes it look like you've only done one section of the map and completely ignored south london...


Matthew Gough's 1 post
Briantist
sentiment_very_satisfiedOwner
11:18 AM
Sam C: Actually you'd be the second. I have it printed out at A1 size on my wall! it was £22 at Prontaprint...

Briantist's 38,844 posts
Briantist
sentiment_very_satisfiedOwner
11:23 AM
@Matthew Gough: Yes, I did get called some awful things for doing something I hadn't done.

Kate Gould's 1 post
A
Algernon Black
sentiment_satisfiedBronze
8:02 PM
Clever ideas however, all the existing Overhead (British Rail) lines south of London are 3 rail systems and the "Underground" runs on a 4 rail system. Also platforms
will be of different heights on BR lines compared to TFL (LT) lines.
The current line extensions have been undertaken by use of full size trains and coaches and that will be the drawback in future. The ONLY full size railway in central London is Cross Rail.

Algernon Black's 23 posts
I
Iain Martin
10:40 PM
St. Neots
Brian,
I love the map and well done for all the hard work that must have gone into it!
One question though! Have you uploaded your correct final version?
On the snapshots above you can quite clearly see the luminous green HS2 route.
On the linked main map there is no sign of it!
Do you know something we don't? :-)

This map found via the Twitter feed has the High Speed 2 line!

(Hopefully this works this time as it created a copy of my first post). (PE192SU)