Let's have an honest look at the current political situation and what it means for the BBC Charter renewal. 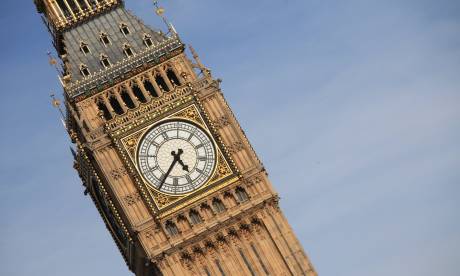 The ongoing operation of the BBC depends a very British constitutional device known as a Royal Charter. The eighth - and current one - expires at the end of the 31st December 2016, which is 590 days away (the 1947 one was extended for 6 months, the 1952 by two years and the 1964 one by three and then two years).

Royal Charters became law by being signed-off by the Monarch. Charters don't come from Parliament, but via the rather medieval bunch known as the Privy Council. You can see a list of the people (who are all addressed as the Right Honourable) in this group here -

Quite if a new charter will "emerge" from cross-party support or from a partisan angle is a good question. This is because of the rather unique situation in the Houses of Parliament.

Whilst there can be ongoing debate about the need to Reform the House of Lords and the need to have a system of democratic representation that bares relation to the number of the votes of the people, this is somewhat academic whilst we are looking at the renewal of the BBC Charter.

Under the current system, the Conservative Party have - just - a majority of the seats in the Commons, and this allows them to take full control of the levers of government for the next five years.

The Prime Minister has used his power as leader of the party with more than half of the seats to appoint John Wittingdale as Minister for Culture Media and Sport. The minister can use those power appointed to him to make the decsisions he see fit and appointments provided to him by various laws.

As Mr Wittingdale is already a member of the Privy Council he will also be able to take a new Charter to the Palace to be signed.

However, the BBC Charter is really a "head of state approved club rules list". The charter specifies the role of the current BBC Trust, so an executive decision to change some of this to Ofcom, may be possible.

However, the TV Licence is not part of the Charter, but part of the Wireless Telegraphy Act 1949 section 2 (as amended by the 1998 Act). To change this will require an new law.

The problem with the numbers

Here is a graphic showing three sets of numbers. 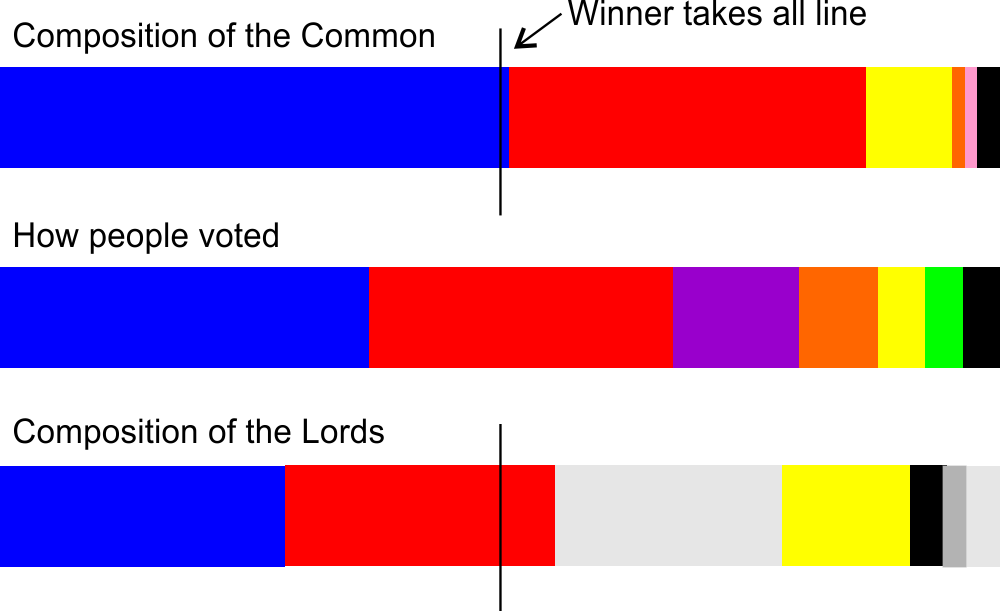 In the first line is the House of Commons by seats. This is all the matters for the Lower House because the MPs assigned to ensuring that everyone in the party votes ("whips") only need a simple, single digit majority to get things passed. Such laws actually take five stages (first reading, second reading, committee state, report stage and third reading) before they are passed.

However, any bill can only be made law if it also passes the same set of rules in the House of Lords. And - as pointed out in alarming style by Quentin Letts in the Mail - the Blue Team don't have a majority there, they only have about a quarter.

It is quite possible that you're thinking: "doesn't the Commons have the upper hand". And the answer is: sort of.

The Parliament Acts of 1911 and 1949 do assign "primacy" to the Commons, and the Lords may not delay a "Money Bill" for more than a month. However normal laws can be delayed by "two sessions over one year". However, the law has been used only four times since the end of WWII (War Crimes 1991, PR for EU Elections 1999, Age of Consent Equality 2000 and Hunting Act 2004). It seems inconceivable that a Conservative government elected on a campaign of "stability not chaos" would use the Act over and over again.

Another small matter is that the Parliament Act is only used to implement things in a manifesto. Which the Conservative one from 2015 says:

"We will: freeze** the BBC licence fee, to save you money.

We will deliver a comprehensive review of the BBC Royal Charter, ensuring it delivers value for money for the licence fee payer, while maintaining a world class service and supporting our creative industries.

That is why we froze the BBC licence fee and will keep it frozen, pending Charter renewal.

And we will continue to 'topslice' the licence fee for digital infrastructure to support superfast broadband across the country."

We will use vital institutions like the BBC World Service to achieve the best for Britain."

** (Might be worth nothing that if the UK inflation rate turns negative "freeze the BBC licence fee" will in effect put it up. )

What of the Salisbury-Addison Convention?

In 1946 this convention was agreed informally by the House of Lords. It says that the Lords will not "oppose the second or third reading of any government legislation promised in its election manifesto"

This is the main reason that the Parliament Act is used only once in a blue moon. However, there is nothing holding the Lords to this, and the diagram shown above makes it quite clear that the current situation of the "majority party" now having only 36.9% of the vote the Lords may feel they have to represent the wider electorate.

The Rt Hon John Whittingdale, Minister for Culture Media and Sport has the support of the Prime Minister and can rely on his party of enact changes to the BBC governance and financing in the commons.

However, given the situation in the Lords and the lack of any commitment to another funding method in the manifesto means that any change will have to have support from the wider political spectrum. However this does exist in the Select Committee Report.

Given the short timescale, it could be that the whole thing gets kicked into the long grass with an extension to the current charter.


All questions
[][][
In this section
Comments
Briantist
sentiment_very_satisfiedOwner
5:53 PM
MikeB: Thanks for your reply.

That is another good quote! Perhaps I should throw "No taxation without representation" into the mix too?

Your point is interesting. The majority of people in the UK do support the BBC, even when they buy newspapers run by self-interested Americans who are worth $14bn and claim that they are not part of The Establishment.

I hoped my diagram above the "Winner Takes All" line illustrates the capture-the-flag nature of the electoral system. However, I don't think that we can expect too many by-elections in the current year.

Interest aside - as United States Presidents and control of Congress - Wikipedia, the free encyclopedia shows - since WWII, the US system has only delivered the same party to all three arms of government for two years from 1954, four from 1977, 1994 and 2009.

I'm not sure if the press can keep the Salisbury Convention going. It isn't really down to the press, it is down to the individual lords voting "yes" to second and third readings of bills. As you rightly say, they don't have to face voters so they can do what they like.

If it were down to me then I would replace the Lords with something more modern and democratic, but it will be interesting to see how things progress as the next five Parliaments sit.

I don't really have any opinion of the Labour candidates. As far as I can see they need to go through the process that resulted in New Labour: listening to the public, having a media strategy, wanting to win - but seem traumatised with how three-terms Tony Blair turned from Bambi to a megalomaniac.

I also agree with you about the current Tony Hall ideas. He seems to have missed the need to renew the love of the BBC with young people (the under 40s) and seems to want it to be like his last posting at the Royal Opera House.

The ease that the BBC can be manipulated by professionals because the cherished balance by strategies such as astroturfing has led to the problems they have with Climate Change and dealing with large Business.

I actually don't think that the subscription option will really fly in the next decade, but of course there are people employed out there to try and push that point of view.

The problem for the Barclay's and the Mail and the Express and Murdoch is that they are far too blatant and unsubtle: you don't get to be an MP or a Lord and not know Newspaper's publishers agenda.

I'm going to do as much as I can to try and keep things fair. I have gone to a great deal of effort over the last few years to try and "think outside the box" (sorry...) and look at every version of the BBC I could think of.

Briantist's 38,844 posts
M
MikeB
sentiment_very_satisfiedPlatinum
11:02 PM
Briantist: Thanks for your thoughts - your perfectly right when you point out that people really like the BBC, despite the newspapers. Its just that they are somewhat confused - they love that BBC presenter, but then get really in a tiz about how much money they are supposedly paid.

The Lords can do what they like (within reason), but dont forget the pressure they will be under from the media - it will be intense, if the Letts article is any indication.

As for Tony Blair - perhaps he was always a mixture of both - its just that the Bambi mask slipped.

'If you tell a lie big enough and keep repeating it, people will eventually come to believe it' (guess who that quote comes from), as perhaps Ed Miliband has discovered! The papers are blatent, but it seems to work.

Thanks for all your hard work so far - you've really laid out the various options over the last year or two, in a way thats concise but very informative. Its a shame that the media hasn't covered it in anything like the way you have, because we would all be much better off if it did!