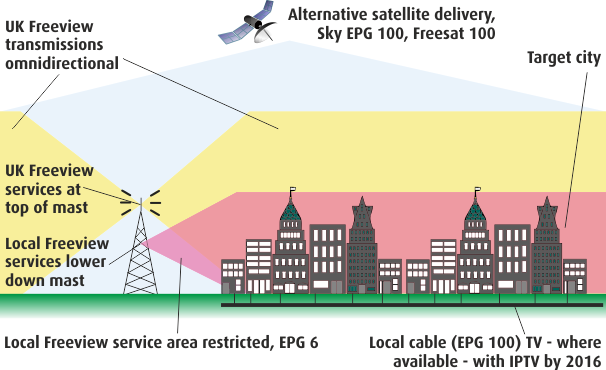 Help with TV/radio stations?
[][][
In this section
Comments
Dave
sentiment_satisfiedSilver
12:31 AM
Surely the transmission will be mpeg4 to future proof the channel ??

What about coverage of local events like the Brighton Festival etc, if the channel is so hard up this will never happen

Dave's 126 posts
Briantist
sentiment_very_satisfiedOwner
6:37 AM
Dave: If the broadcast was MPEG4, the 99% of viewers that do not have Freeview HD receivers would not be able to watch it.

Coverage of local events would be in the "feature content" part of the schedule detailed above.

I'm not sure if a local channel could sustain a whole hour of local news...

Briantist's 38,844 posts
G
Gari Sullivan
1:23 PM
Hi there,
I run a citizen journalism project called NoozDesk and do a lot of work around community broadcasting in th UK and now breaking into the Australian market. I am giving a talk at the CBAA conferance in November and to community organisations all on the subject of citizen journalism.
I would really welcome the opportunity to talk to you on a range of matters connected with community broadcasting at some poiint.

Gari Sullivan's 1 post
S
Steve P
sentiment_satisfiedGold
3:09 PM
What does "around" mean in that context?

Steve P's 1,173 posts
A
Alan J
5:54 PM
Who's going to staff these productions 7 days a week? Assuming shared resources with a local newspaper, what kind of production values are going to be achieved using 3 person teams?

Alan J's 1 post
Briantist
sentiment_very_satisfiedOwner
6:17 PM
Alan J: The idea would be that the people working would be multiskilled, as it normal for TV reporters. They would write, film and edit the content.

To say that the content would be "unwatchable" is a bit presumptuous - most TV news reports are created in this way, but yes, there is a trade off in terms of costs to provide for the required localism.

People always say they want "local" (rather than "regional") news when asked. As there is no money to throw at these projects then they will have to work within a tight budget.

The above schedule was working on an assumption that people will "dip in" to the local channel for no more than 30 minutes at a time, just a few times a day.

The local channels are not required to compete with the existing channels, they will be providing something new - local news, reportage and information.

I would be interested to hear what you have to say about the Local TV initiative.

Briantist's 38,844 posts
S
Steve P
sentiment_satisfiedGold
6:42 PM
I have been reflecting on local TV since this thread started.

I think I probably - or at least posssibly - WOULD drop into a local TV station, even though I don't listen to local radio; preferring R4.

Regional TV is not much use if you live in North Wales, as it is mostly about South Wales - literally at the other side of the mountains.

Or I can watch NW region - but that covers a huge area.

Though on Freeview I can only get Central. I have no interest whatsoever in the midlands. Never been there except in transit.

BUT these proposals will give us Liverpool. Which is worse still.

Steve P's 1,173 posts
Briantist
sentiment_very_satisfiedOwner
7:44 AM
Steve P: If you are not in the Liverpool reception area, you get Liverpool TV, unless I guess you are between a mast and that city.

For DTB we are the extreme NW of Central, but the Local maps have us extreme S of Liverpool - which includes much of NE Wales.

News of scousers scallying is not for us.

Will they report of Wrexham FC?