Time for the BBC to release the DOGs?

If 70 households really missed the BBC so much after 9 days, to the extent their £3.60 "refund" seemed like a bargain, shouldn't the BBC start better marking the output with "paid for out of the TV Licence" marks? 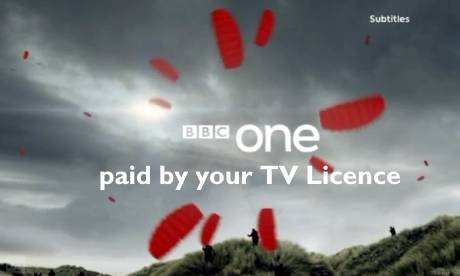 BBC One ident with something extra Photograph:

Here's an interesting document that has been doing the rounds.  It's called "Life without the BBC Household Study, 15 August 2015" and it seems that when cut off from ALL of the BBC services, these test households really didn't that they were watching the BBC.

Which rather begs three questions:

At least until there is a new BBC Charter?   Do you have a better idea?


All questions
[][][
In this section
Comments
M
MikeB
sentiment_very_satisfiedPlatinum
12:44 PM
Macclesfield
Keith Sheppard: 'You say many households were unaware they were watching a BBC programme. What mystifies me is why this should actually matter to a public service briadcaster.'

Because if they are unaware that its a BBC programme that they are enjoying, they are more likely to forget that its the licence fee that is paying for it. People who complain about the licence fee tend to think that they dont watch the BBC, despite all evidence to the contrary. The DOGS, etc help to remind them of this.

DOGS are not perfect, but I have to admit I would prefer to watch in HD if I had the chance, DOGS or not.

MikeB's 2,579 posts
M
Mark W
6:25 PM
If Auntie needs to remind viewers that they're paying for the programme that they're watching then adding DOGs to all channels wouldn't be too bad, especially if it is discrete. Being here in the USA constantly reminds me how UK broadcasting in general is better than broadcasting here. Nearly all "programs" broadcast on US public television are preceded by "underwriting messages" (short adverts with neutral, non promotional language) and the message "And contributions (to your PBS station / station name) by viewers like you - thank you!" It's intended to remind viewers that it's charitable donations to the station that they're able to enjoy the programme they're watching. A short message on the lines of "Funding for EastEnders is provided by the people of the UK via the TV Licence. Thank you!" might be a bit crass but if this thing was aired at the start of each programme (yes, including the news) it would certainly drive the message home that they're paying for the programming they enjoy through the licence.

Mark W's 2 posts
Peter P
11:45 PM
I cannot for the life of me see the necessity for DOGs. On most if not all modern television receivers the channel, details of the current broadcast, date and time are displayed along the bottom of your screen each time you select a new programme. I find some of the larger and brighter graphics intrusive and take my hat off to Film Four, who thus far seem to have resisted the temptation to include a DOG.

Peter P's 4 posts
R
Richard Cooper
sentiment_satisfiedGold
8:58 AM
Norwich
Peter P: Hi
Peter. I am inclined to agree with your opinion on digital on-screen graphics. If you are like me, you study the programme guide before you decide what to watch on live tv and then select the channel you wish to view in time for the start of that programme. Once you have selected said channel, you are confident that you have the correct one by virtue of the fact that your chosen programme or show can be watched, without a constant and ANNOYING reminder of the channel name and/or programme/show title having been plastered on to or over the picture! I expect it's all about maintaining 'brand awareness'!!! Richard, Norwich.

Richard Cooper's 461 posts
Brian Wright
sentiment_satisfiedBronze
9:11 AM
Peter P:
Interesting, The BBC always has a D.O.G. preceding the team scores during a live football match in the top left hand corner.
I think whatever is constanly on the screen it requires to be subdued and about 50% less luminance that "peak white"
During BBC breakfast news, there is always a D.O.G in the form of the current time.! quite unobtrusive I think.

Brian Wright's 77 posts
M
MikeB
sentiment_very_satisfiedPlatinum
5:13 PM
Brian Wright: I suspect its not just about brand awareness, but it also makes it easy to see if anyone is nicking your feed, etc. Think of it as a watermark!

MikeB's 2,579 posts
K
Keith Sheppard
9:06 PM
Brian, curiously I don't mind DOGs during factual programmes like the news, sports etc. It's during dramas that's they annoy me because they snap me out of my "suspension of disbelief" whenever the top left of the screen went dark, throwing the DOG into high contrast. I used to spend hours recording programmes onto my computer so I could run them through DOG removal software. Myself wife couldn't understand why we could never watch anything live.
These days I've learned to become more tolerant but I still resent them. I wonder if the broadcasters could achieve the same ends by showing DOGs only for the first and last five minutes of a drama, allowing dinosaurs like me to watch the majority of the programme uncluttered.

Richard Cooper's 461 posts
MikeP
sentiment_very_satisfiedPlatinum
1:48 PM
I presume by using the 'DOGS' you are meaning the station identification logo (SIL) often shown at various times durimng the broadcast. Some channels display such all the time they are running programmes, some show them even during adverts, others show them part of the time. I find such SILs useful occasionally.

MikeP's 3,056 posts
S
StevensOnln1
sentiment_very_satisfiedPlatinum
10:18 PM
Michael Martin: They're the channel logos that are often seen in the top left (or sometimes top right) corner during programmes on most channels.