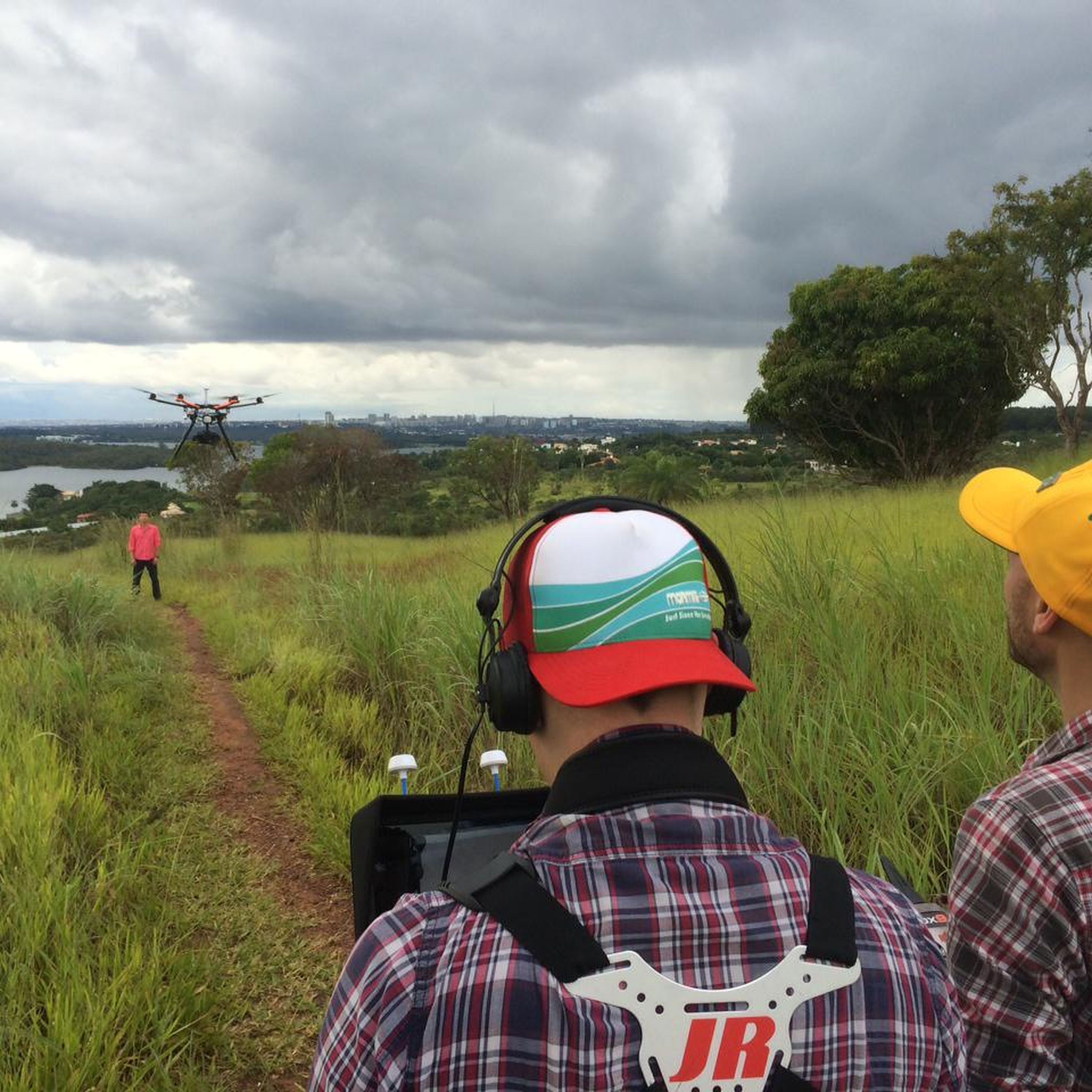 Hello and welcome to another bonus edition of the media podcast we're back with a proper show next week, but in the meantime take a listen to this Owen reach Innovations producer with the BBC World Service he spoke to the media podcast about his particular area of expertise drones those little mini helicopters controlled from the ground that have become another tool in televisions armoury and also from last week's guests Liz Howell and Leon Wilson with their take on the technology the first is owing.

My name is Owen rich and I'm in Innovations producer with the global video unit which is part of the world service to my favourite shop that we've done with the cop disease the shop.

We got of the Christ the Redeemer Statue in Rio it was before the World Cup we went out there to make a series that was going to be running during tournament.

We got up really early in the morning got there about 3 a.m.

20 members the public would ever be there.

We had a complete cold and off we got the Copter up not that highway from from me, but you know the shops sell looks like it was very high and it was up in the clouds is a recent of murky day, but that gave it an extra sense of perspective.

It was very so interesting that you were floating in the clouds and I was pleased with the with perspective.

We got on such as a set of iconic think you seem a lot of times but not necessarily from that angle.

So the way we work is we work as a two-person team so I fly the craft and I have also a camera operator who controls the camera and they are receiving a video downlink from the craft which allows them to see what they're getting and they have full control 360° of that camera, but really it's like any piece of equipment like a gerbil or Steadicam was all her working with a Focus puller or anything like that.

It really need to have you know develop the working partnership with that person so that when you do something like I fly up in the air and I want the camera is it still down and track an object we we need to work in terms of so we can we do practice and you really seem improvement house as you get further more practice at it.

You can see a real improvement in the things that you can actually get get a bit more confident and do some slightly more.

Solving images to the process starts with planning and planning is with a important part.

We have a licence which is called been up S which is a civil aviation authority permission for aerial work in the UK that requires us to fulfill certain obligations with regards flight planning to the first stage of the century looking at where you're gonna fly whether that be in the UK or overseas, and of course we need to dealing with a location overseas, which is what we're primarily doing the global video unit is being World Service we travel a lot.

We get an invoice and we see if it's even possible because certain countries have quite stringent regulations very progressive and fully formed policy like Australia where you said you would need to translate your qualification.

Best shots are really like they reveal something you know unexpected so one of the shots that we did in the Auschwitz video was we popped up behind one of the gun Towers to then reveal the landscape of Hearts that stretched as far as the eye could see and unexpected reveals something just give you a different perspective now the technology is maturing to the point where the really seeing a difference between those people who just flying around in the sky in an essentially.

No, it's grey and the images are unique and interesting then you but as it becomes more common place to have these kind of aerial shots you really see the difference between that the filmmakers your crafting the shots are really understanding filmmaking principles and the shots which essentially just aerial shots that you wouldn't have been able to get before so it's it's really about now coming to the point where it's like thinking of creatively as well about how you can use those shots and how to tell.

The audience in that was owain rich Liz Howell from City University London and Leon Wilson from TalkBack I'll with me Liz BBC News got into a bit of trouble at Davos didn't they are taking pictures from above and I mean really this raises the whole question of privacy and what you can do in waiting for the camera and sound and it's very interesting because if you if you're feeling on a public street.

I need is a public street, then it you're perfectly free to film and you can say whatever you like and you get a lot of problems with this with students and obviously my student got filming and they're coming on the public highway and people try to move the morning.

What have you got the car because you've got the right to formal statement well, that's when it isn't Council might ask you for a small sum of money but in fact in terms of privacy.

You can see from the earth.

YouTube Madonna and the sweet embrace thing cases about this for example in the US they took a aerial photographs down the the Californian coast and the something in a celebrity really really objected to the fact that aerial photographs being taken out of their home in their property and so is that legitimate or not and it's something is going to have to be sorted out of in a row at Davos is just a router as a drone go there, but it does raises questions about working II film what can you see it, but it also shows if even the BBC who have an army of people to do compliance didn't bother asking for permission before they put a drone in the air to what extent was him to sort of anyway.

We don't really know if that happens under the BBC's provisions and presumes that really is happening everywhere else.

Is it Sunny Leone at TalkBack if you actually use the drone before yeah? We've you squeezed rhinoceros on Through the Keyhole we started using series 2 Total give a different view of the house.

We were looking at and there's loads of fun day great.

They really quite cheap better helicopter.

Which is prohibitively expensive see you can get them up there and film.

Did you know we did want me?

Keith Lemon on a boats in the middle of Lake Windermere and would normally we went out for dinner.

Cos it cost me £10,000 and he wouldn't get permission to film with Angelina in the middle of the lake on his own.

It was all of them.

I just going to say the same thing as well, but the base of the cameras well.

That's the question Skype interviews people want to see they are they are to get the right ones and Jenny with programs you allowed 20% of any the material in it is allowed to be non-broadcast qualities lot to 20% can be old's St staffing and that's not even asking permission so we can get it.

Broke the same qualities all the rest of it the same resolution as the green stuff in the rough stuff is actually effective so it depends whether you say what it is or whether you contextualizing somewhere, but it's here to stay in fact.

It's gonna get bigger all of this stuff pictures of the future.

You can have a drive permanently of your house in managing these letters GoPro stuff in Elgin auction sporting television entertainment and I think this will stop seeing things like example X Factor what you can actually see the contestants POV shot during the show and more than this block will be done in entertainment television with different trucks camera work one day.

We'll all have GoPro stuck to her head all the time.

I'm convinced of its own personal fix Rick doesn't it, Thanks to Lyon Antilles and to enrich of course as well now pledges to the media podcast can hear an extended version of that interview on our members website.

How you become a drone operator and some of the kit available at that is at the media podcast squarespace.com where you can also hear the full bug event we played a fortnight ago with Miranda Sawyer and Matt Kelly do we get depressed we deserve all of that at the media podcast.

Squarespace.com and if you haven't pledged but you want to don't worry.

We'll have more details on how you can do that very soon.

I can only man the few set Hill until next week.

Potential by definition is the possibility of achieving more in the fast-paced world of digital advertising Oracle data cloud has built its Legacy on finding the signal through the noise on unlocking potential we bring together data and technology to help you better understand your audience where to best engage them and how to measure a tool to realise true potential Oracle data cloud where better outcomes begin visit Oracle data cloud.