If you live in Sheffield and Chesterfield your digital switchover "ends" tonight, Wednesday 24th August 2011


Viewers in South Yorkshire and Chesterfield that use the Sheffield and Chesterfield full-service Freeview transmitters (and their relays) will have no analogue television from Wednesday 24th August 2011. Unless you use cable or satellite to watch television, if you don't use a Freeview box or set, your screen will be blank.

Most people need only perform a "full retune" on their Freeview box or TV, but it would be impossible with 157,800 homes covered by the transmitters, for no-one to have a problem. In particular the ArqB multiplexes at Sheffield and SDN, ArqA and ArqB multiplexes at Chesterfield will be at restricted power for several weeks after the "end" of switchover - see below. 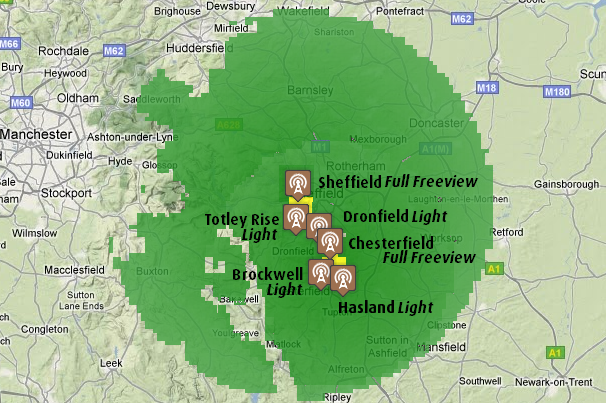 Restrictions on SDN, Arqiva A and Arqiva B multiplexes at Sheffield an Chesterfield

At Sheffield, the ArqB multiplex will operate on C63 on 24th August 2011, and will move to the final position, C49, and power level on 28th September 2011, when C49 stops being used for Channel 5 analogue on the Oxford transmitter.

At Chesterfield, SDN ArqA and ArqB are restricted to only 40W output until 12th October 2011 when it becomes 400W.

If you had no Freeview service before, you will have the BBC channels digitally from Wednesday 10th August 2011. This is a single multiplex of the BBC channels (radio, television and text) for most people.

If you didn't get this limited Freeview service on 10th August 2011 then you may need a new aerial.

If you are served by a public service (relay) transmitter - Brockwell (9am), Dronfield (noon), Hasland (noon) or Totley Rise (9am) transmitters - you now need, from around lunchtime on 24th August 2011 to rescan, and you will get a second Multiplex with ITV 1, ITV 2, ITV 1 +1, Channel 4, Channel 5, Channel 4+1, E4 and More4. And that's your lot if you have a standard Freeview receiver, see Freeview retune - poor public service transmitters.

Freeview HD will start on Wednesday 24th August 2011 from Sheffield, Chesterfield and all the relay transmitters. You will need a Freeview HD - DVB-T2 receiver to watch the channels. An HD TV set with Freeview is not enough.

Help with Freeview, aerials?
[][][
In this section
Comments
D
David Manser
5:40 PM
Worksop
Retuned as directed but now get Look North from Grimsby. How do I get Look North Leeds which we have always had previousley.


David Manser's 1 post
P
Phil Beaumont
6:30 PM
Sheffield
Hello, have lost all bbc freeview channels in the last half hour. Tried retuning (4 times), checked all connections and aerial, etc, still no bbc. ITV ok.
Anyone else got this problem? I am in the Crookes area of Sheffield .

Phil Beaumont's 2 posts
P
Phil Beaumont
6:38 PM
I've lost all bbc freeview channels in the last hour, ITV and others seem unaffected. Anyone else had the same problem? I'm in the Crookes area of Sheffield, very close to the transmitter.

Briantist's 38,844 posts
Briantist
sentiment_very_satisfiedOwner
10:12 PM
David Manser: If you have not done a "first time installation" as required you may find your box now has the incorrect services.