Following on from Watching the London 2012 Olympics - a guide (part 1) - ukfree.tv , here is some additional useful information about watching the Olympics in the UK. 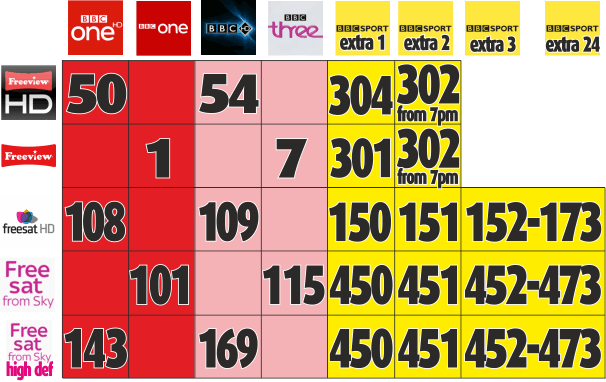 Mark Agius's 371 posts
Mark Agius
sentiment_satisfiedGold
9:46 PM
Haywards Heath
PS
I remember hearing that ITV4+1 was dropped from Sky's EPG list when ITV1+1 started because there was no more room in the EPG list.
Well they have found room for the BBC's 48 Olympic channels.

It uses the 3G network.

Mike Dimmick's 2,486 posts
Briantist
sentiment_very_satisfiedOwner
10:47 PM
Mark Agius: I have been told that if you never subscribed to Sky HD, the channel numbers are reversed.

Briantist's 38,844 posts
A
Andrea
9:53 PM
Please help I watch my tv through sky but I no longer have a subscription. I cannot see the extra 24 channels, do I need to manually add the channels or can i get all 24 through the red button? reading all this but it's very confusing not sure what to do. I can see the add a channel button on my sky box so do I just tap the codes in?

Andrea's 1 post
Mark Agius
sentiment_satisfiedGold
8:14 AM
Haywards Heath
Re: ITV4+1 (See above)
Going off subject, but I have just noticed that ITV4+1 is back in the Sky and FreeSatFromSky EPG.

Mark Agius's 371 posts
G
Graham
6:59 PM
I have followed your guide to configure the extra BBC olympic HD channels on my Windows Media Center 7 PC with Freesat tuners. Thank you VERY much for it. However there is no EPG (programme guide) available within Media Center for the extra channels. Does anyone know if I can get EPG for olympic events? It is going to be pretty difficult to record the events I am interested in without it. Many thanks.

Fixed! I now have EPG for BBC Olympic channels.