There is a bit of a dip in the space available on Freeview HD for high definition channels once 5G mobile services start next year, but the capability will return.

As Freeview High Definition users in Cornwall already know, the number of TV channels being broadcast in the UK will be cut back in mid-2020  to make way for the fifth generation of mobile phone data services.

This is because the number of multiplexes being broadcast will be cut back to the original six.   The extra two were provided as a “interim service”.    A Freeview multiplex is a single broadcast of binary data that occupies a 8MHz frequency range.    In the UK each of these can carry 24.1, 27.1 or 40.2Mbps or of data.

Because older TV sets and set-top boxes can only work with 24.1 Mbps, it is only possible for the owners of the multiplexes to use the higher capacity modes when every home has switched to Freeview HD capable equipment.  This equipment is marked with “DVB-T2”.

As illustrated, the total bitrate (in a home that can receive all the multiplexes) will change over time.

Not all the multiplexes are the same:

This can be summaries in this table.

Freeview requires about 2.2Mbps for a standard definition channels and three times that for a high definition one (6.7Mbps).

One problem for people with Freeview HD receivers will note is that HD channels are grouped together in the program guide, rather than appear as replacements for the standard definition channels as viewers expect.    This is because the six channels on the BBCB multiplex (BBC One, BBC Two, CBBC, ITV, Channel 4 and Channel 5) can only be seen on newer boxes, making channel number replacement impossible without breaking the oldest Freeview equipment.

Basically the UK-wide BBCA and D3&4 multiplexes can’t change mode until ALL homes can receive them.

There is good news, however, for the SDN, ARQA and ARQB multiplexes.    They can switch modes to the high definition whenever they feel that it is commercially practical.   This might be at a lower level of Freeview HD box use, perhaps 80% or 90%.

By switching to DVB-T2 mode, each of them can increase their capacity from 27.1 to 40.2Mbps and take advantage of MPEG4. 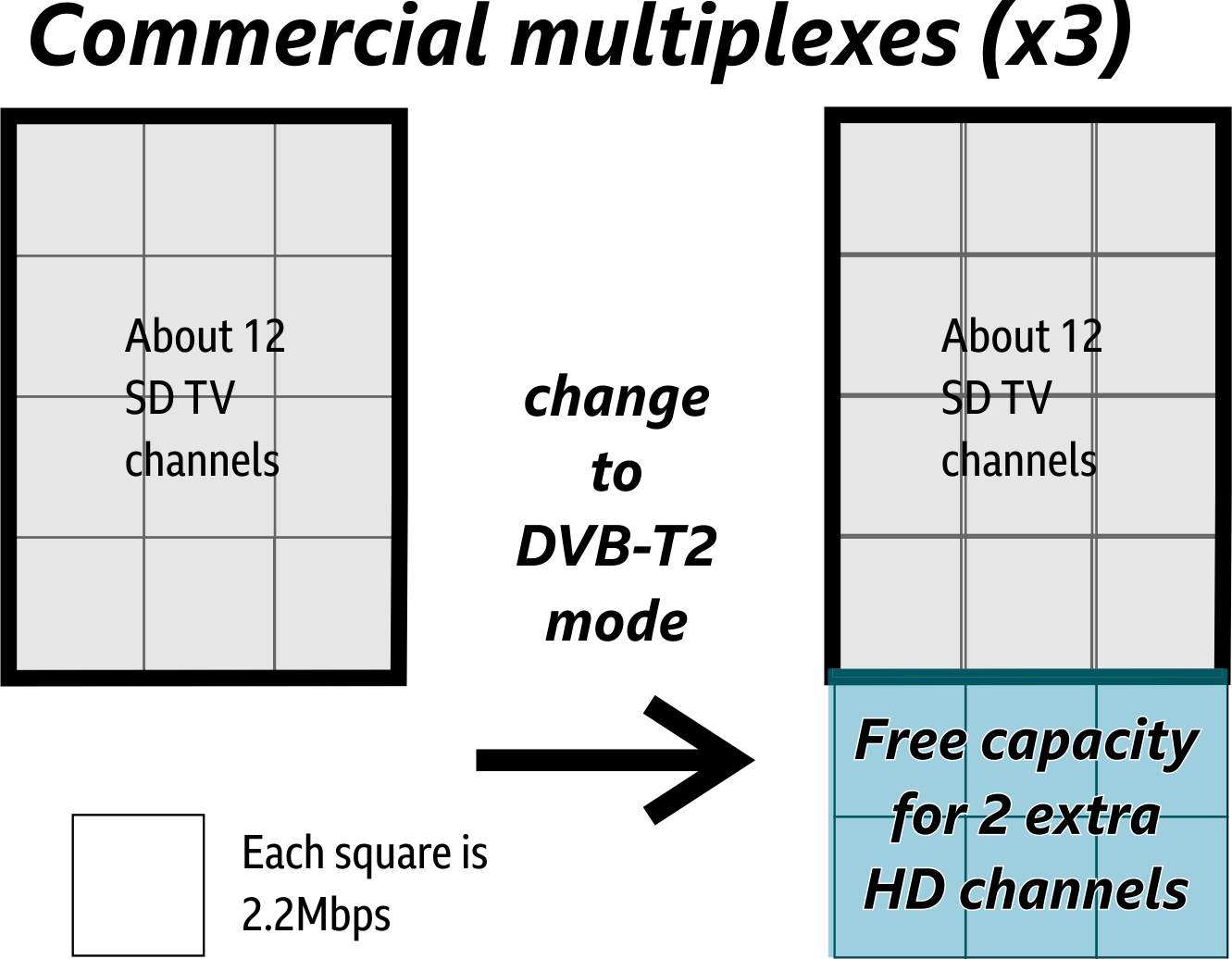 So, of the 80Mbps lost when com7 and com8 close, half of that can be got back by SDN, ARQA and ARQB upgrading, which would be enough for an extra 6 full HD services. 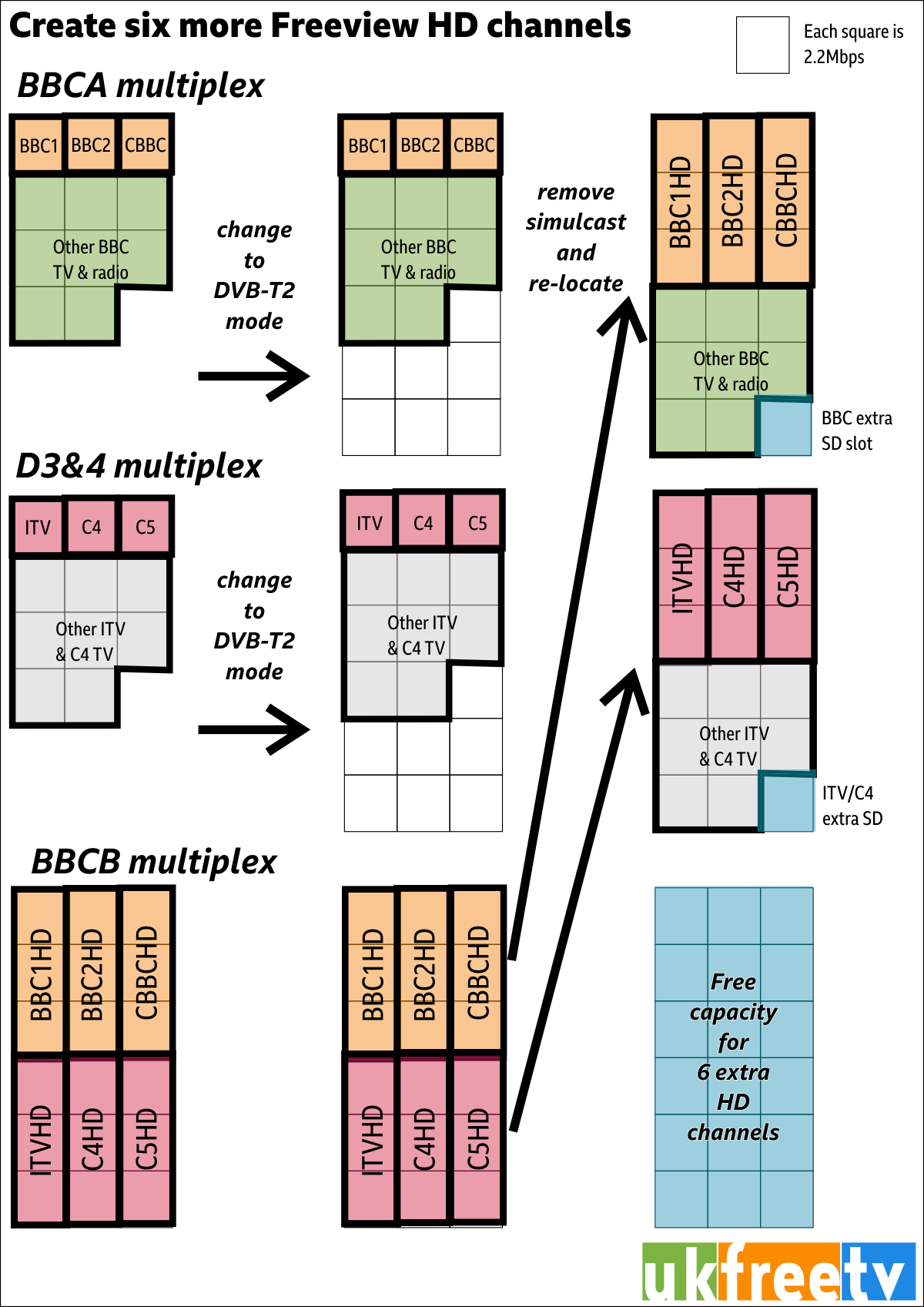 The gains for the BBC when everyone has a DVB-T2 receiver are larger.     It will:

For the D3&4 multiplex, the gains are similar:

I hope that's as clear as possible!  Any qestions?


Help with TV/radio stations?
[][][
In this section
Comments
J
John Martin
sentiment_satisfiedSilver
11:29 AM
I would,nt miss them and their left wing views. Paid my tv licence off the other day. Then I thought how little I watch on their channels now About 3 a week for nothing. Use to watch doctor who but that is so pc now.
The Doctor is alright but the scripts are rubbish. Just like previous doctor. He was ok but scripts were trash.
No would,nt miss BBC if it was to disappear up their own backside tomorrow.

John Martin's 103 posts
A
alan Francis
4:27 PM
When are regional services going to be available on HD. we keep having to switch from BBC HD to SD to watch local news, and ITV HD only ever put London Local and not South west news.

There a number of factors involved in providing regional HD services. One is the availability of HD multiples bandwidth to carry the additional services ad HD uses more bandwisth that SD services. Until the authorities make available the additiona bandwidth needed there will not be any significant increase in rea=gional HD services. Another factor is the cost of providing HD equipment in all the studios. I'm sure there are other factors as well. The end result is that we will bnot be seeing any significant increase in region al HD services as yet.

MikeP's 3,056 posts
P
Peter
10:15 PM
Another problem is cost of satellite capacity for an hour a day for all the BBC regional services.

les's 1 post
C
Chris
12:40 AM
While I appreciate the cost factor in recording the programs in HD and sending the signal to the transmitter, the really annoying part is having to change channels for regional programming and back for HD national programming. The SD signal is being sent to the transmitter anyway, why can't it simply be upscaled and broadcast on the HD channel? Every modern piece of video equipment can do it, isn't rocket science.

Whatever changes are needed, it costs money to invest in the equipment. The BBC would rather waste money on other things. You would be best writing to the BBC to complain.

Chris.SE's 3,285 posts
C
Chris
4:42 PM
Hi, so just as a general update, are ALL com7 and com8 transmissions ceasing at the end of June? Will all those channels just disappear on a certain date or is anything confirmed regarding making more space as mentioned in the article? As the article is quite old now and we are almost at the turn off date mentioned, I just really wondered what the latest is!

Chris's 1 post
S
StevensOnln1
sentiment_very_satisfiedPlatinum
10:43 PM
Chris: There has been no date announced for any COM7 or COM8 services to close and their licences have been extended by Ofcom. Given that the 700MHz centre gap frequencies used used by those multiplexes haven't even been auctioned yet (the entire 700MHz auction has been delayed and may not now take place until later this year or even early next year) it is very unlikely that any closure date will even be announced, let alone take place this year.

They are NOT being turned off at the end of June 2020. As you say, the article is quite old, but nevertheless there are many pages and other websites that refer to this date that need updating. There has been no specific date decided yet and in any event this was originally a proposed date by OFCOM but Arqiva wanted to push it back later.

The 700MHz frequencies haven't been auctioned yet, OFCOM only released documentation about how the auction would proceed in March this year. A date for the auction wasn't specified and that is now all delayed because the 700MHz clearance hasn't been completed due to covid-19. This is because much of the final clearances needs In-Home support (new aerials) and that can't be readily provided under social distance rules. Freeview/DUK are currently suggesting final clearance won't proceed until 2021 but this TBD.
OFCOM have proposed that Arqiva be given 3 months notice by whichever MNO(s) (if any) purchase the frequencies allocated for SDL in which COMs 7&8 sit, when they are ready to use them. This is likely to be some considerable time after the auction is complete as "encoding" hardware has to be developed, as do suitable handsets to use SDL. This is not as straightforward as the current FDD mobile Tx/Rx.

The Freeview/DUK Detailed Coverage checker leaves the impression that COMs 7&8 may still be there until 2025 as it shows reception "Final prediction" as 2025 on all transmitters including those with COMs 7&8. So it's all undecided at this time, but practically unlikely to be before 2022 at the very earliest in any event.
There is a hint elsewhere that Arqiva MAY be re-organising the channels on COM6 and that might be because of longer term plans to convert COM6 to T2 transmissions BUT this is all pure speculation!