The commercial multiplex after switchover: ArqA, ArqB and SDN

A frequently asked frequency question is: why the commercial multiplexes have to have power restrictions after the switchover is officially "complete". The answer is...


At a significant, but minority, of transmitter sites, the three commercial multiplexes, and in particular ArqA and ArqB are often held at low power for many months following the digital switchover.

The following graph shows the allocation of the old analogue networks, in effect on the day before digital TV was first introduced to the UK. Along the bottom is the channel numbers from C21 up to C68, with each network coloured coded and the height of each bar representing the number of homes served. 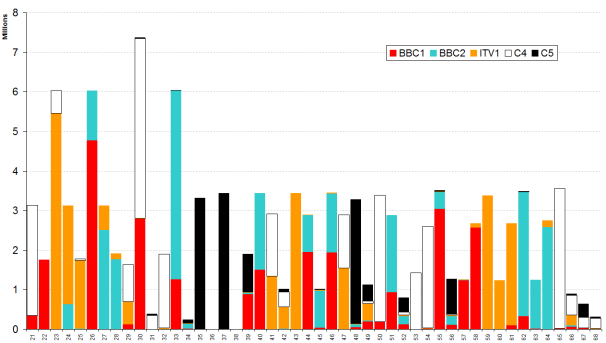 Another use of the frequencies is to divide the coverage into two services, such as C33 where 5 main transmitters serve 4,773,899 homes with analogue BBC TWO, but also 80 relay sites use it for analogue BBC One to 1,254,378 homes.

The reason about 10 "total" frequencies are required for each full analogue network is the Inversion Effect - during certain weather conditions the analogue television signals would travel much further than usual as they bounce back to the ground due to a layer in the atmosphere acting like a signal mirror.

These generous allocations allowed, back in the 1990s, the planners to provide low power digital services. This is because the system used for encoding the digital services, COFDM, looks like "snow" to an analogue service. Under inversion conditions, if the digital services "leak" to other areas, they will cause a small amount of snow to appear on an analogue picture, and COFDM has a number of systems built into it to reject interference from analogue.

This diagram shows an "analogue view" of the digital services - they appear as "noise" that will degrade an analogue picture by making it snowy. 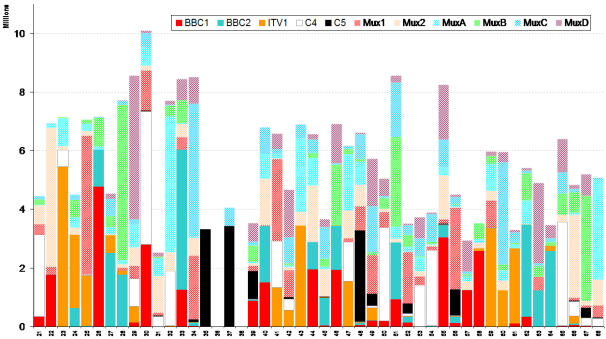 By accepting that the digital coverage would not match the analogue service, both in terms of the number of transmitters (just 80 main ones), and the power output levels from these transmitters, and also by using carefully calculated radiation patterns (meaning the signal does not broadcast at the same level in all directions), ONdigital was able to provide a service.

To provide the digital services to all homes in the UK it would then become necessary to close the analogue services and reallocate the frequencies.

The diagram below shows how this has been done. 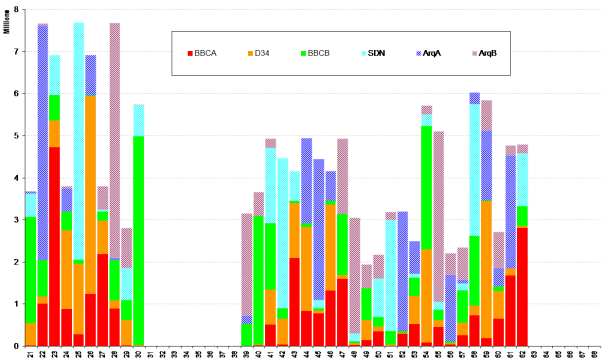 Some frequencies have been reallocated to other purposes - such as C61 to C69 for fourth generation mobile phone services, the so-called "digital dividend". (Note that C61 and C62 are shown as allocated in the diagram as the transmitters using them will be shuffled to C39 and C40 before the 4G services launch, C31-C37 are being returned to digital TV in 2012-15).

In general this means that three of the analogue network plans have been kept, and allocated to the public service broadcasting multiplexes: BBCA, D3+4 and BBCB (which is Freeview HD). This was necessary - it means that these multiplexes remain "in group" at all transmitters, so reception of these is possible without changing an existing aerial.

This means that the space for the three commercial multiplexes SDN, ArqA and ArqB have been reallocated into the effective "gaps". For this reason, the coverage of these multiplexes is much like the three most powerful multiplexes before switchover.

For this reason, whilst the network is being changed between the analogue/digital to digital-only network it is often necessary to keep the power levels for the commercial multiplex on low power, or to assign them to other temporary frequencies.

As you can see from this diagram, the outcome is that most of the main 80 transmitters will provide lower coverage for all services (light green) than they do for just the public service multiplexes (dark green). 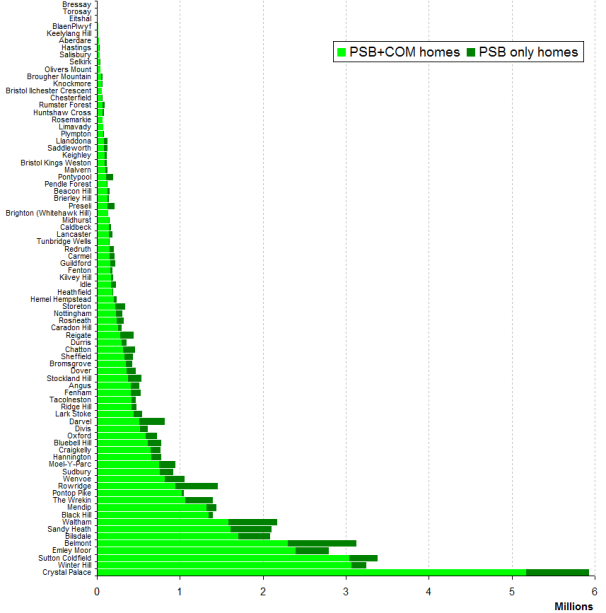 Help with Freeview, aerials?
[][][
In this section
Comments
Dave Lindsay
sentiment_very_satisfiedPlatinum
11:27 AM
P Thomson: Blackburn is vertically polarised whereas Belmont is horizontal, so a horizontal aerial should act to "reject" any unwanted signals to a degree.

Dave Lindsay's 5,724 posts
M
Mike Gordon
11:57 AM
I like in Harefield and have lost ArqA programmes such as Sky News consistently this past week up until around 11.0 am. They literally disappear off the listings as if they were never there. A conspiracy theorist would say this is a deliberate attempt by BBC News 24 to boost their own viewing theories, or is it really just atmospherics?

Mike Gordon's 8 posts
D
doug smith
10:18 PM
Fareham
Dave TV has been working well since the switchover. It has recently become unwatchable and freezes continuously. It was on Channel 19, but after a retune of the TV it seems now to have moved to Channel 12. Reception is still useless.
Post Code is PO175AU

However, whilst the PSB channels (which carry BBC, ITV1, Channel 4, Channel 5 etc) are the same power for both, the COM channels (ITV3, Pick TV, Dave, Film4 etc) aren't as strong horizontally. Thus, better reception of the COMs is likely by switching to vertical polarisation.

All channels are Group A which means that an aerial installed for former analogue should be OK (no need for a wideband); just switch to vertical.