If you live in the North East of England - you will need to perform a 'first time' retune on your Freeview TV or set-top box when you get up for breakfast on the morning of Wednesday 26th September 2012.

Viewers in North East England who use the Bilsdale, Chatton, Pontop Pike or Fenham "full Freeview" transmitters (and about 43 smaller relay transmitters) will have no analogue television from Wednesday 26th September 2012. Unless you use cable or satellite to watch television, if you don't use a Freeview box or set, your screen will be blank.

Please note that the "Burnhope" transmitter will no longer be required for television other transmitters will provide coverage. 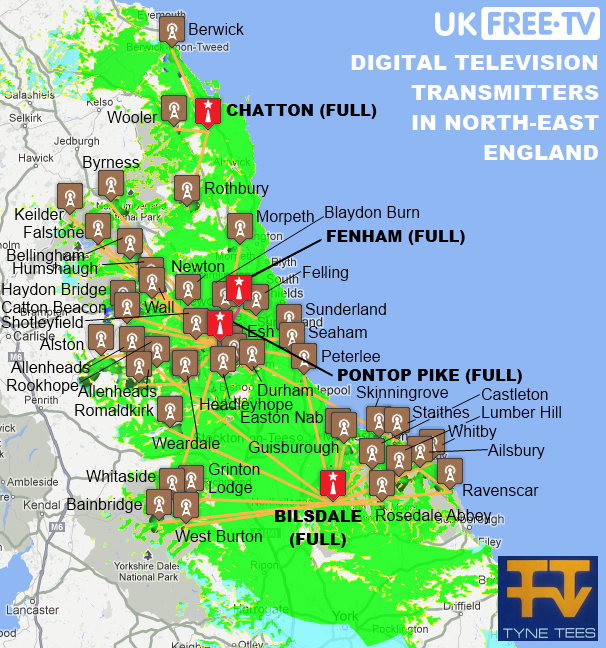 On these maps, the full-service six-multiplex transmitters are shown with the "red star" Freeview logo. The public service three-multiplex masts are shown with a brown indicator. The green areas on the maps, are the areas where the strongest signal is from the shown transmitter region, with the light blue showing overlap areas where signals from other regions are stronger.

If you had no Freeview service before, you will have the BBC channels digitally from Wednesday 12th September 2012. This is a single multiplex of the BBC channels (radio, television and text) for most people.

If you didn't get this limited Freeview service on Wednesday 12th September 2012 then you may need a new aerial.

MCMLXII man's 12 posts
D
David
sentiment_satisfiedGold
3:11 PM
Well if it completed reception is terrible, just had a couple of holidays up there worst reception in the whole country.
I was dreading Bilsdale going degital as I thought it would cause caos in Leeds etc which use Emley Moor just like Belmont causes to other parts of Yorkshire.

David's 306 posts
D
David
sentiment_satisfiedGold
2:22 PM
MCMLX11
Sorry I duplicated what you said, anyway nothing happened to put us right or correct the web page.

David's 306 posts
W
williamson
8:27 PM
we have just switched over to didgital this morning and all the bbc channels are braking up and no sound.I have retuned a number of times.

williamson's 1 post
M
Mark Fletcher
sentiment_satisfiedGold
9:16 PM
Halifax
Williamson.As you did not leave a full postcode or a nearby location as such,we cannot be of any valuable help to you.
All i can say is you have too much signal.

Mark Fletcher's 673 posts
S
susan burton
9:40 PM
I forgot to switch over this morning, but I did it this evening when I came back from work, My mam had tv on during the day and it worked ok, no different to any other day, i have tv with built in freeview, bad aerial signal and never had all channels before, still the same, will I still get upgraded or will I have to wait until 26th September 12

Dave Lindsay's 5,724 posts
R
Ray Black
11:31 PM
Did a tv rescan and a STB (Sharp Freview HD) and have lost all HD services I had previously.What happened?.....will I get them back?

Ray Black's 2 posts
Dave Lindsay
sentiment_very_satisfiedPlatinum
10:39 AM
Ray Black: Try a manual tune on UHF channel 63 (specifying DVB-T2 mode if there is such an option).

DVB-T is the mode of standard definition multiplexes and DVB-T2 is that of the high-definition one.