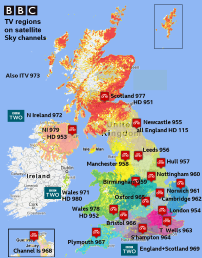 From Wikipedia: The channel's annual budget for 2011/12 is 1,166.6 million.3 Along with the BBC's other domestic television stations, and many European broadcasters and some in Asia, it is funded principally by the television licence fee, and therefore shows uninterrupted programming with no commercial advertising at any time. It is currently the most watched television channel in the United Kingdom, ahead of its traditional rival for ratings leadership, ITV1. This system used a vertically-scanned image of 30 lines just enough resolution for a close-up of one person, and with a bandwidth low enough to use existing radio transmitters. - en.wikipedia.org  read more about BBC One (SD) on wikipedia (summary by Clipped).

About BBC One (SD)

Free channel of the day: BBC One


How is the free channel paid for?

BBC One has live presentation, and both national and regional are broadcast live. In addition the daily The One Show (7pm) is live, as are sporting events. All other programmes are pre-recorded and are almost always commissioned by the BBC and having their first showing.

The channel is customized for viewers in Scotland, Wales and Northern Ireland, as to a lesser extent in the English regions, and has the most extensive television regional news service in the UK.

The rest of the schedule is mixed, with factual (Mon 7:30pm, 8:30pm) and entertainment and factual/entertainment mix shows (such as Motorway Cops). Thursday night has politics from 10:35pm onwards, Friday night being entertainment only.

The morning schedule of Cash In The Attic, 11:30am and Bargain Hunt, 12:15pm are formalistic.


This channel carries a subtitles service for the deaf, hard of hearing and quiet environments.
Comments
M
Michael Dawson
1:11 PM
The house where I live is surrounded by 3 local tv transmitters but I receive my signal from EmilyMoor and since I have retuned all I receive 51 including HD.
I have done a factory reset and auto retune, retuned with antenna and internet-connected so the box is completely empty of channels. Then I did a manual tune just using the channels between 35 and channel 56 and I am still missing all the stations I used to receive before the changeover
All cables are checked out ok the only thing different is the transmissions
Any help would be appreciated please

Michael Dawson's 2 posts
S
StevensOnln1
sentiment_very_satisfiedPlatinum
2:40 PM
Michael Dawson: Give the Freeview Advice Line a call (see link below) - they can send someone out who can fit a replacement aerial (if your existing aerial is no longer suitable following the frequency changes) free of charge if you don't have satellite or cable.

You have missed out C33 which is now used by Emley for the SDN/COM4 multiplex, however if you aren't getting programmes on C33, C36, C41 etc., you should do as StevensOnln1 has stated.

Chris.SE's 2,077 posts
I
imi
1:30 AM
I have since thurs (20-02-2020) I have as required retuned the smart TV using autotune. Everytime it does not retune the BBC channels. Today tried using the info on web for manual tuning but still nothing shows except the information from the user guide. I supposed that if it managed to get the channel details for the autotune then it should, as previously did, tune into BBC channels wrong!

What process do you advise now so that these channels will show, Freeview site shows Winterhill is transmitting fine. Confused but hoping to hear good news from you.

Hi, rather than retype everything, I'll simply say it sounds like you may need a new aerial for which you can get free help from Freeview. But try this first if you haven't already Unplug the aerial and do an automatic retune. This should clear all previous tuning as no channels will be found. Plug the aerial back and repeat the retune. If you haven't got the BBC channels in their normal places or if they pixelate & break up periodically, read on.

There's also all a full list of where to get the BBC channels at Winter Hill (Bolton, England) Full Freeview transmitter | free and easy as well as on the BBC link.