No longer will Brighton terrestrial viewers get their 'local' news from 60-miles-away Southampton, but from Tunbridge Wells, after switchover.


Back on 3 September 2001, the BBC split the old Newsroom South East region.

The Oxford part had became an opt-out of South Today from Southampton in October 2000, and in late 2001 the rest of this large region was then split into two: a service for "M25" London (BBC London News) and another one for Kent and East Sussex.

This new service, which is based at studios in Tunbridge Wells, is called South East Today.

The city of Brighton and Hove, which is located in East Sussex, is just 33 miles from Tunbridge Wells, did not switch to this new service on analogue or Freeview, but Sky, Virgin Media cable and Freesat viewers have enjoyed South East Today for many years.

Central London is closer - and better connected - to Brighton than Southampton, Hampshire. Brighton and Hove's 250,000 population makes it the largest city in the South East Today region, larger than Canterbury's and Maidstone's 150,000.

Brighton and Hove is served by one main transmitter on Whitehawk Hill, and eight relays at Bevendean, Brighton (Central), Coldean, Hangleton, Ovingdean, Portslade, Patcham, and Saltdean; historically some viewers in the west of the city had their aerials pointing at the Rowridge transmitter on the Isle of Wight. 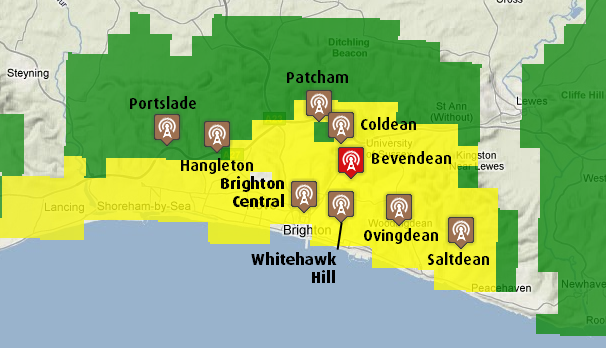 At switchover, all the transmitters in Brighton and Hove will switch to the South East Today region on Freeview.

Help with Freeview, aerials?
[][][
In this section
Comments
M
Mick Carter
7:04 AM
Brighton
Dave Lindsay, I'm in Mile Oak, Portslade, high up on the hill, and my digital antenna (same type as in the picture at the side of this page), is pointed towards Whitehawk Hill. Unfortunately (for me)a local booster has come on-line in Portslade which I believe may be getting it's signal from Rowridge. So now on channel one I get BBC South, although if I go to channel 800 I can still get BBC South East, but the South East programme is suffering from break-ups now.

You say that you have BBC One South (on UHF channel 24) from Rowridge on logical channel number (LCN) 1. But with Portslade carrying BBC One South East, as Whitehawk, then you will probably find that there is another BBC One South East further up in your 800s. As Whitehawk uses higher channels (frequencies) than Portslade, it will have been "found" after Portslade which is why it's higher up. The thing to do is bring up the signal strength screen and identify which is which; Portslade's BBC is on C41 and Whitehawk's is C60.

The channels used by each of these three transmitters are:

There may always be others, but these are all those suggested by Digital UK.

Portslade only carries PSB channels, so viewers who cannot receive from another full-service transmitter will only be able to view those channels. For this reason, even though Portslade is a better signal, you will probably want to stick with Whitehawk.

In order to tune to Whitehawk's six multiplexes, wipe the memory and manually tune to them (five if it's not a HD receiver). You should hopefully be able to wipe the memory by doing a scan with the aerial unplugged (failing that, some sort of reset maybe). If your receiver allows manual tuning, then you can do it that way.


Or you can aim to have the aerial unplugged on the lower channels used by Rowridge and Portslade. If there is no manual tuning then this is probably your only option.

If there is a function to scan for "new" services/channels, whilst not wiping what's already stored, then you might use this to capture 48 later. In which case, run a full scan (not "add channels") and aim to get the aerial in for Whitehawk's lowest PSB channel of 53 (51 if it's a HD receiver). This gives you a bigger target gap (48 to 52 or 48 to 50) to get your aerial in for. Plug in at 56% (if it turns out that you get C47 from Portslade tuned then you will have to try again leaving it a little later). Once you've done this, you should have all of Whitehawk's multiplexes except perhaps COM6 on 48. Then run the "add new services" but have the aerial unplugged for the first 50% and (hopefully) it will add the other channels. As it will probably pick up Portslade, but these should go into the 800s as the proper LCNs are now occupied by those of Whitehawk (which was the purpose of the initial scan). Unplugging the aerial for the first 50% is to prevent it putting COM6 from Rowridge on the main LCNs and sticking Whitehawk's in the 800s.

Dave Lindsay's 5,724 posts
Dave Lindsay
sentiment_very_satisfiedPlatinum
10:50 AM
Mick Carter: Some receivers retune when unattended so as to add new channels. If this is a full scan, it may put you back to square one. Not all receivers allow this to be disabled, but if you can, you might want to disable it. If you can't and it does as it pleases, then you will have to cross that bridge when you get to it.

Dave Lindsay's 5,724 posts
M
Mick Carter
6:59 PM
Brighton
Hi Dave, thanks for all the information, I'll try to stick with the Whitehawk transmitter, as it seems to be the best for everything I need. Appreciate your help.