With ITV reinstating the rural Border region for the 500,000 people in Cumbria, you might feel a little disappointed if you are one of the 2,500,000 people whom ITV has only two minutes a day of local news for - those in Oxfordshire, Berkshire, northern Hampshire, Wiltshire and parts of Surrey.

Many years later, Central Independent Television was hoping to hold on the licence to broadcast and "in advance of the 1992 franchise round, Central raised the bar by creating its own new sub-region, giving the area served by the Ridge Hill and Oxford transmitters in the west and south of the region its own local news service. The new regulator, the Independent Television Commission, responded by making this a requirement for all applicants. "

The last time there was an competition for the Channel 3 licences (rather than a simple renewal of the status quo) was for the period stating in 1993.

To the south of Central, the licence went to Meridian Broadcasting, who split their region into three: news would come from not just Southampton but Maidstone and Newbury

During the mergers that took place to form a single company running Channel 3 in England and Wales, ITV plc combined the Meridian Newbury news area with the Oxfordshire part of Central South to ITV Thames Valley. The Ridge Hill area reverted back to Central West - this lead to complaints and an extra service of ITV West (see here) was provided from the Ridge Hill transmitter's South-East for Gloucester and Cheltenham. 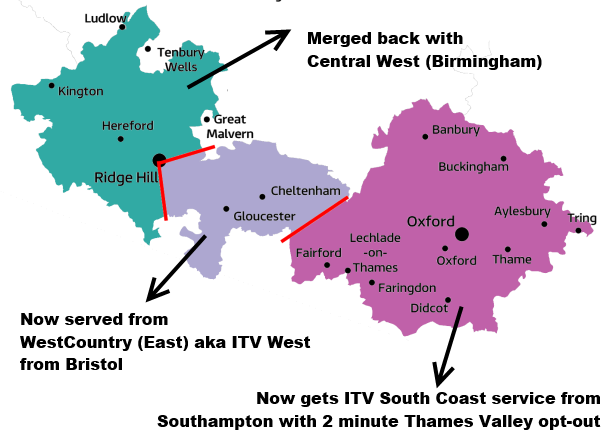 Since then viewers in Oxfordshire and what was Meridian Newbury have had couple of minutes of news as an opt-out from the larger Meridian region.

So, it is almost shocking that if you visit the ITV sales site, Central South is still alive and well and has the new ITV logo on it (see What area does ITV Central cover? - Why should I advertise on ITV? [pdf]). 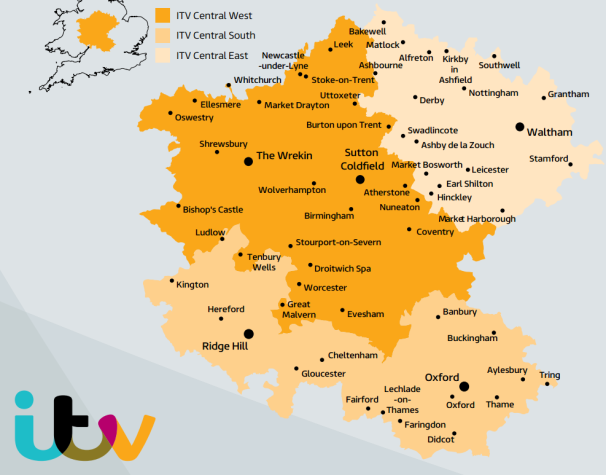 Whilst the new arrangements restore many of the best ITV sub-regions, there are some such as WestCountry Televisions FOUR (Barnstaple, Exeter, Plymouth and Truro) that seem unlikely to return.

But it is back to the future for Anglia...


All questions
[][][
In this section
Comments
Dave Lindsay
sentiment_very_satisfiedPlatinum
12:57 PM
Charles Brenan: Is Channel 4 in the 800s? You are looking for Channel 4 which is coming in on UHF channel 60, probably as indicated by the signal strength screen.

Dave Lindsay's 5,724 posts
C
Charles Brenan
1:00 PM
Kidlington
No - can only get as far as 791 which is Film 4. Then goes back to the beginning. I'm resetting the box to see if this works.

Charles Brenan's 3 posts
Dave Lindsay
sentiment_very_satisfiedPlatinum
1:06 PM
Charles Brenan: Film4's native logical channel is 15. Perhaps this is a Film4 from another transmitter and rather than putting the "other" channels in the 800s your receiver stacks them following the highest number which is Heart on 728. So have a look in the range 729 to 790.

Dave Lindsay's 5,724 posts
MJ Ray
sentiment_satisfiedBronze
10:56 PM
King's Lynn
Hi Brian. No worries. The computations are probably why this site's maps are so much better than the official ITV fiction. I'm between King's Lynn and Downham Market and Belmont is fairly strong, Sandy Heath is possible, but Tacolneston is a dream. As you seem to suggest, it may be Thetford Forest or the Brecks to blame, as the terrain plot suggests there isn't much clearance at some points and those evergreens are rather tall! Meanwhile, it's open fenland to our west.


MJ Ray's 44 posts
S
Scott
sentiment_satisfiedSilver
9:21 AM
What will happen next time round? Will each franchise be offered separately or will they be offered as a 'job lot' that ITV plc can bid for? Is there a possibility that ITV might bid for Scotland?

Indeed, will there be a next time?

Scott's 110 posts
R
RobC
10:29 AM
Last time I looked Fairford and Lechlade-on-Thames were in Gloucestershire so they get even worse coverage. East Glos has always been on the edge: served (poorly) by Mendip or Oxford depending on exactly where you were. In analogue days we got BBC London news from Oxford and the Central News South was in reality obsessed with Oxford. Now we get South coast or West (the entire South West in ITV's case).

RobC's 1 post
Briantist
sentiment_very_satisfiedOwner
3:44 PM
RobC: The TV region are caused by the location of transmitters - the fact they roughy cover county areas is largely a coincidence.

Briantist's 38,844 posts
J
Jenny
4:23 PM
Until the storms over the Christmas period I received Meridien South (covering all southern coastal areas up to the western Dorset border) but since Christmas all I received as local ITV is South West - I do not need to know what is happening in Bristol and all places West! What has happened to cause this? I live in Poole.

Jenny's 1 post
Dave Lindsay
sentiment_very_satisfiedPlatinum
4:55 PM
Jenny: The reason is that the TV has retuned, either of its own accord or because you retuned it. I imagine that it is probably tuned to Mendip now, it providing West programmes and its signal being available in parts of Poole.