Diary of changes to capacity of ArqB, ArqA and SDN multiplexes

Here is the current list of known dates of the changes to the three commercial multiplexes occurring in October and November 2011.

There are changes going on to the 58 full-Freeview transmitters that have "switched over" to digital only transmission and are carrying the high power digital services.

By a modification to one of the parameters used for broadcast (the "forward error correction") the capacity of the multiplexes increases by 12.5%, which is sufficient for an additional standard-definition channel to be broadcast.

In the dairy below, 19 transmitters have an ArqA mode change, and 8 have changes to SDN.

Help with Freeview, aerials?
In this section
Comments
Dave Lindsay
sentiment_very_satisfiedPlatinum
9:31 PM
Doncaster
Will these changes mean retuning will be necessary?

What do the bold dates in the table signify?

Is this change a trade-off which results in more capacity at the expense of ruggedness of the signal?

The bold dates are this week.

It also suggest that the "Guassian channel sensitivity" (ie, the minimum signal at the receiver that can be decoded) will go from -78.3dBm to -76.3dBm. 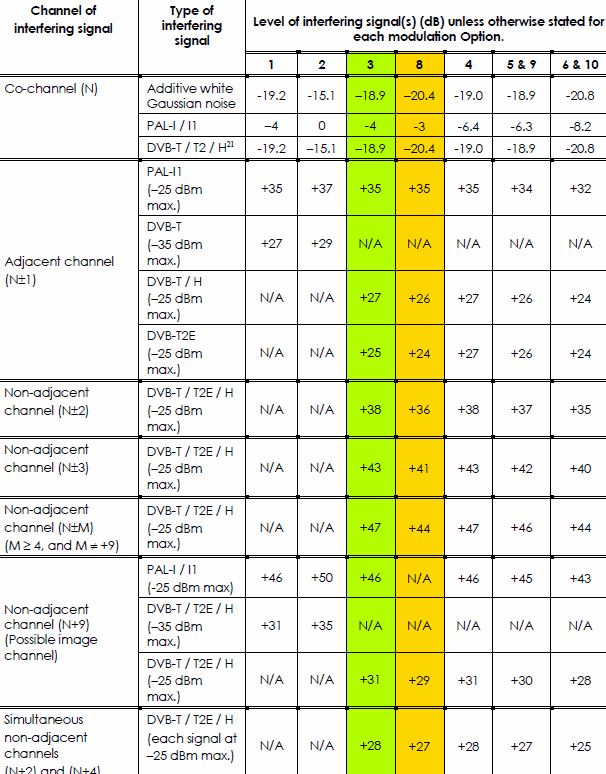 Oxford TX ArqA and B were in this mode at the end of September, so I would guess they slipped it in at DSO2 on the 28th - despite the fact that the com multiplexes are only at 1/4 of their intended strength and 1/8 of the PSB there was still an improvement compared to pre-DSO.

Users still in marginal receptions areas will be rightly annoyed by this - their reception is currently impaired due to an engineering test sending out 4MB/s unused null packets right now!

Where is the official notification of this test - and what/when is the intended use of the extra capacity? Surely unlikely to be used before Crystal Palace goes through DSO2?

mst's 18 posts
Briantist
sentiment_very_satisfiedOwner
9:22 AM
mst: I am interested to know how you think that "their reception is currently impaired due to an engineering test sending out 4MB/s unused" can happen.

As I said above, on on 23rd November all switched-over transmitters will have the extra capacity on ArqB, and so I would suggest there will be an extra channel by Christmas.

There is no need to wait for Crystal Palace DSO2 because there is "matched capacity" on Multiplex B that has been approved by Ofcom.

Briantist's 38,846 posts
M
mst
9:11 AM
St. Albans
Briantist: take Oxford for example - the com muxes are currently -9dB relative to the PSBs, COM power up due next April to take them to -3dB.

Due to mode change on ArqA and B the effective difference for same picture quality is raised as per your table above.

OK Its only 3Mb/s null packets - at the moment, but I suggest this change has not been well communicated - not needed until there are actually new channels.

Clearly there's techno/commercial issues at play - but anyone who can receive the COM multiplexes could clearly benefit from same mode change on the PSB muxes - higher bitrate better quality on existing channels please!

Are you suggesting the pre-DSO BBC Mux B is also going to carry a couple of extra commercial channels? It already carries Sky Sports 1 and 2 so there is precedent, but most folk can't see them!

mst's 18 posts
A
andyboy
4:18 PM
Benfleet
hi is sudbury arqa arqb will be on full power on the 22nd of now will i have to rescan my box again

andyboy's 14 posts
Briantist
sentiment_very_satisfiedOwner
8:55 AM
mst: Yes, at *most* masts the COM channels are lower levels and have lower coverage than for the PSBs. COMs do not have a "global coverage" requirement, the PSBs do.

Picture quality is not a function of signal strength, it is dependant on the bitrate allocated within the multiplex.

This change has NOT been communicated to the public AT ALL. I only know about it because I have non-public access to the information, coupled with the ability to scrape pages from the Digial UK site where you can see the changes if you know where to look (and you can spot the errors).

The changes will NOT happen to the PSB multiplexes, these are require to provide full coverage for 1000+ masts and the more robust mode is required for this.

Ofcom said it was OK for Arqiva to sell space on ArqB/ArqA coupled with pre-DSO-B during the period before the completion of switchover, and this was for more than just the two BT-owned "Sky Sports" slots.

Briantist's 38,846 posts
Briantist
sentiment_very_satisfiedOwner
10:51 AM
andyboy: No, those multiplexes will not change to their final power levels until 27th June 2012.

Briantist's 38,846 posts
A
andyboy
8:40 AM
Benfleet
hi andyboy again my tv says retun on the 9th and the 23rd of nov can you tel me why this at sudbury

andyboy's 14 posts
M
mst
8:50 AM
St. Albans
Briantist:I understand the link between bitrate and quality when reception is fine, but there will be a 'fringe area' where the digital signal quality is close to the cliff-edge between watchable and not (Analogue TV had more graceful degradation). The power difference between PSB and COM makes it clear that some will only be able to get PSB channels, and there will be a 'fringe' area where COM is marginal. The mode change just moves this fringe in towards the TX a bit.